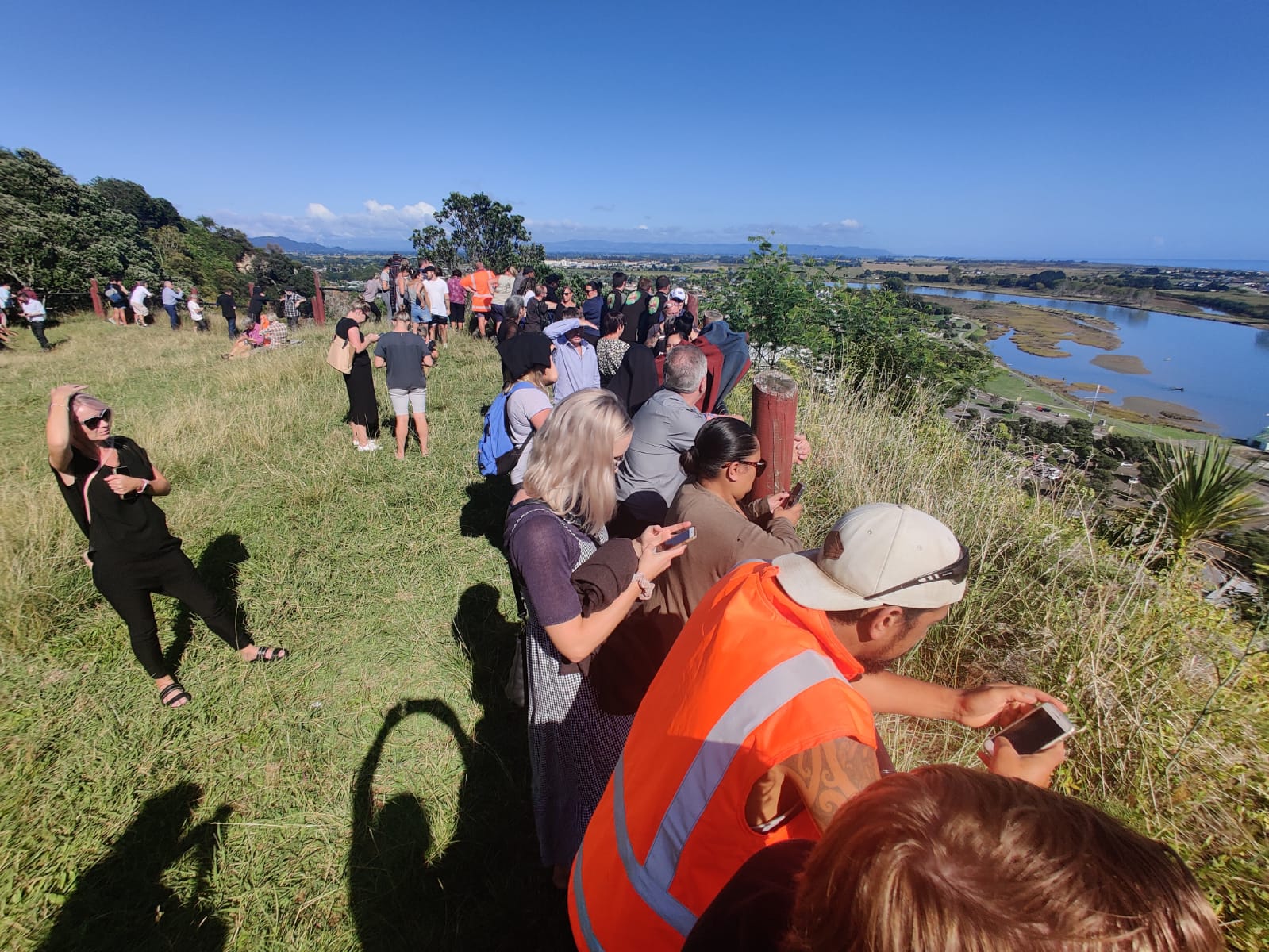 The largest waves caused by this morning's 8.1 magnitude earthquake near the Kermadec Islands have now passed and everyone who evacuated can now return home, but people are still being warned to stay away from the shore.

Surge activity has been seen across Northland, following three large earthquakes in the Pacific this morning.

Multiple tsunami warnings were issued by Civil Defence this morning after a 8.1 magnitude quake near the Kermadecs.

Dozens of quakes have caused shaking around NZ today…

Have a watch ▶️

But in its latest advisory, Civil Defence said GNS Science had advised that the largest waves have now passed

"All people who evacuated can now return."

Wave surges are continuing to hit parts of the country and thousands of residents were earlier evacuated and told told to stay on higher ground following the massive earthquake.

Much of the North Island - including Northland, parts of the Bay of Plenty and the East Coast - were under a tsunami warning and entire towns, such as Opotiki, were evacuated.

Other coastal areas were under a beach and marine warning, including Auckland, where residents have been told to stay away from beaches. Video shows wave surges already hitting areas like Tokomaru Bay on the East Coast.

Civil Defence issued a warning to stay away from the beaches in Auckland due to the possibility of strong and unusual currents and unpredictable surges near the shore.

All ferry services in Auckland have been suspended until at least 2pm.

The Britomart Train Station has been temporarily closed due to the possibility of flooding. The high tide due shortly could be an issue at Britomart.

Hundreds of workers, students and residents have headed to higher ground after a third, massive Pacific earthquake this morning - and a tsunami threat that affects much of the Northland, Bay of Plenty, East Coast and upper West Coast coastlines.

Residents were told to move immediately to higher ground after the magnitude 8.1 earthquake struck off the Kermadec Islands, 1000km northeast of New Zealand, at 8.28am (NZT).

There was gridlock in places such as Whangarei and on other roads around the affected regions, but roads are now reportedly clearing.

"People near coast from the Bay of Islands to Whangarei, from Matata to Tolaga Bay, and Great Barrier Island must move immediately to nearest high ground, out of all tsunami evacuation zones, or as far inland as possible," the National Emergency Management Agency alerted at 8.45am.

"People near coast from the Bay of Islands to Whangarei, from Matata to Tolaga Bay, and Great Barrier Island must move immediately to nearest high ground, out of all tsunami evacuation zones, or as far inland as possible," the National Emergency Management Agency alerted at 8.45am.

Just before 10am, it tweeted the following:

"The West Coast of the North Island from Cape Reinga to Ahipara.

"The East Coast of the North Island from Cape Reinga to Whangarei, from Matata to Tolaga Bay including Whakatane and Opotiki.

Roger Ball, NEMA acting director, told Newstalk ZB's Kerre McIvor that waves would be hitting in the far north about 10am.

He said a tsunami was like a really strong surge of water, a rushing inwards high tide.

Surges of 1-3 metres are expected, which on top of high tides, can be dangerous, Ball said.

Ball said it was a massive inconvenience, but it was not done lightly and had been done on basis of watching tsunamis in Indonensia and Japan.

"It can take lives, and cause great damage. We want people to take this seriously."

Ball said police focus was on public safety and making sure people were looked after. He said people in areas who needed to evacuate had been sent emergency mobile alerts. They only went to those people, and not others who did not need to evacuate.

It goes without saying but please:
⚠️Listen to @AucklandCDEM and follow instructions for your area
⚠️Stay out of the water (sea, rivers and estuaries, including on boats)
⚠️Stay off beaches and shore areas
⚠️DO NOT go sightseeing

Thousands of residents are fleeing homes, workplaces and schools to get to higher ground, and there are reports of chaos in towns such as Whangarei and Whakatane. There are reports of people at the beach in Tologa Bay, with cameras.

Businesses in central Whangarei have evacuated and employees have been advised to go to higher ground.

A central Whangarei worker said it was packed in town as people tried to evacuate. "[There were] heaps of people standing on the street outside their workplaces."

Whangarei Intermediate School evacuated, with pupils walking to higher ground at the cycle track near their school.

People were being told to walk, run or cycle if possible to reduce the chance of getting stuck in traffic.

The National Emergency Management Agency says people should not return to low-lying coastal areas until the all-clear is given by Civil Defence.

This is the third and largest quake above magnitude seven to hit the region this morning.

A 7.4 quake struck near Raoul Island in the Kermadecs at 6.41am and many New Zealanders were shaken awake by a magnitude 7.1 quake off the North Island's east coast at 2.27am.

TSUNAMI WARNING issued following Kermadecs earthquake. People near coast from the BAY OF ISLANDS to WHANGAREI, from MATATA to TOLAGA BAY, and GREAT BARRIER ISLAND must MOVE IMMEDIATELY to nearest high ground, out of all tsunami evacuation zones, or as far inland as possible

Both of these earlier quakes triggered Civil Defence tsunami warnings that were later lifted but the third quake has sparked the strongest warnings yet.

Ōhope resident Leslie Peake said traffic was "bumper to bumper" all the way down the main drag Harbour Rd and there were "huge queues of people evacuating".

She said the mood was highly "stressful" and she and her husband would not be getting to higher ground for a while as they waited in traffic.

Hills across the town were "full" with people seen sitting at the top looking out at the ocean, she said.

She said she had been in her bedroom when she received the alert and saw it pop up on the television so she and her husband loaded up their car with their cat and dog.

"We thought maybe we should get moving."

This morning's quake had been really strong where Peake was and she said it had been "really rocking and rolling" and "went on for ages".

"It was really rattling for some time." 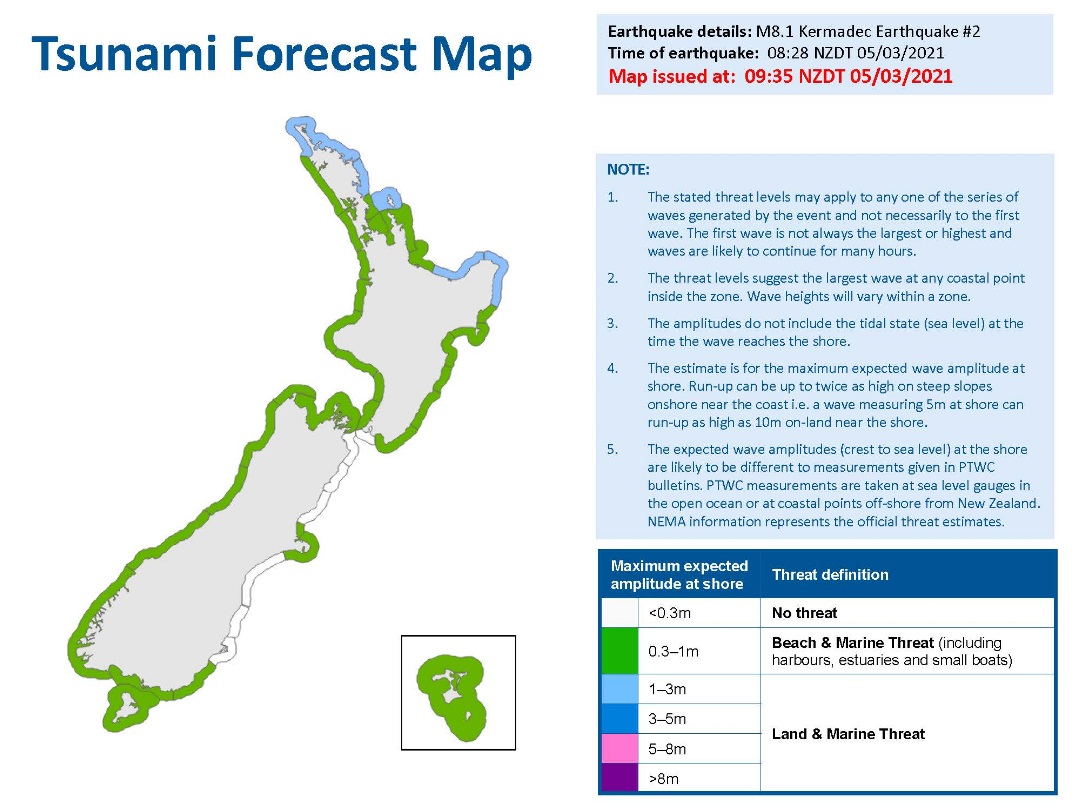 She said most of the coastal Bay of Plenty town is needing to evacuate.

While the Kermadec Islands are expected to fare the worst in the wake of the third quake, French Polynesia, Cook Islands, Fiji, New Caledonia, Nuie, Pitcarin Island, Tonga, Vanuatu, Solomon Islands, Wallis and Fortuna and New Zealand are all in the firing line.

The first jolt, off the east coast, woke thousands of Kiwis earlier today.

Authorities issued a national advisory at 7.30am, warning people of tsunami activity near the Kermadecs. It followed a 7.4 magnitude earthquake off Raoul Island, the largest of the islands, at 6.41am.

"We expect New Zealand coastal areas to experience strong and unusual currents and unpredictable surges at the shore," the National Emergency Management Agency said. "People in or near the sea in the following areas should move out of the water, off beaches and shore areas and away from harbours, rivers and estuaries."

A marine #tsunami warning has been issued for #NorfolkIsland following an 8.1 magnitude earthquake north of #NZ on Friday morning.

No threat to the Australian mainland at this stage.

Areas under threat are the East Coast of the North Island - from the Bay of Islands to Whāngārei.

NEMA said there was no need to evacuate other areas - unless directly advised to by local Civil Defence authorities.

The latest quake followed an earlier earthquake that struck at 2.27am about 95km east of Te Araroa, causing "severe" shaking throughout much of the country.

Land and marine warnings that followed the 7.1 earthquake were later lifted and people have been told they may return to their homes.

Following the earlier quake, trains were halted and lines across eastern parts of the North Island are now closed ahead of track inspection for possible damage.

People in Auckland, Wellington and even Christchurch all reported feeling the quake.

"She was a beauty, it really shook. I'm quite frightened, I've got no idea if there's going to be a tsunami, it was massive," Rex from Gisborne told Newstalk ZB's Bruce Russell.

Gisborne Mayor Rehette Stoltz said it was a big shake.

"Everyone was awake, our Civil Defence teams got into action immediately to make sure everyone was safe and sound." 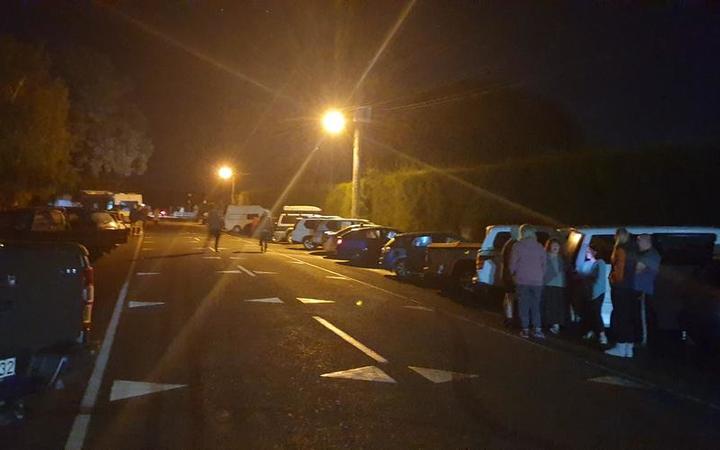 Cars line up at Haumoana School in Hawke's Bay, where people from coastal communities of Te Awanga and Hawke's Bay evacuated. Photo: RNZ / Anusha Bradley
She said she's incredibly proud of the locals, who acted fast.

"Gisborne people, Tairāwhiti people, when there's an earthquake and it is long or strong, they self-evacuate. Because you cannot wait for locally-created earthquakes, you need to self-evacuate."

One Twitter user from Wellington described the first earthquake as "terrifying".

In tears on Newstalk ZB, Helen in the Chatham Islands said: "It's the biggest one I've ever felt. It went on and on and on. I'm in the old stone house and I didn't know where to stand because it's all rock. I've never felt one so big - it must be massive across New Zealand. It died down and then went on and on again."

Janice in Napier told the station: "I'm still shaking. I was lying in bed ... and the next minute, the quake comes in and it lasted for ages. The biggest one I've felt. This was one jolt and it kept going. I eventually got up and sat under the doorway, oh my God."

And Eric in Manawatu said: "It woke me up. It was a rattle, and the house was swaying a bit. But it went on and on - it kept going. It wouldn't stop. I thought, OK what's next?"

Prime Minister Jacinda Ardern has posted on Instagram: "Hope everyone is ok out there - especially on the East Coast who would have felt the full force of that earthquake". She repeated the message on Facebook:

By 3.15am more than 60,000 people had reported feeling the quake via Geonet's website.