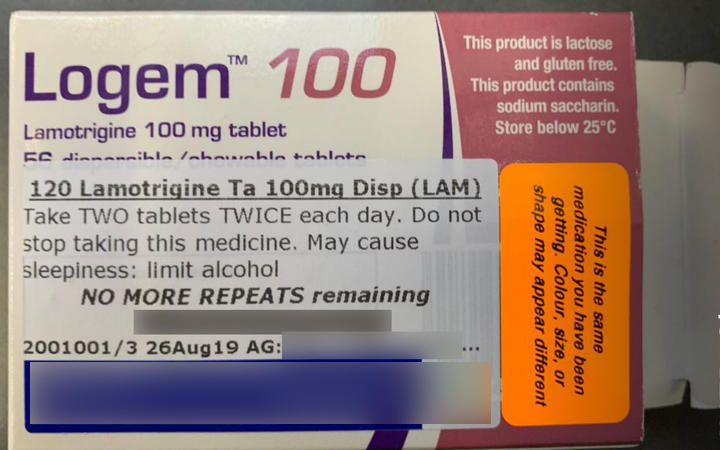 A few weeks before she died, one woman picked up this Logem medication. Her mother believes the switch may have caused her death. Photo: RNZ
Three deaths have been reported to the Centre for Adverse Reactions Monitoring after the Government's drug-buying agency Pharmac forced patients using the medicine lamotrigine to switch brands.

About 11,000 people - most with epilepsy but some with mental health conditions - are switching to a generic form of the drug, called Logem.

Medsafe announced on its website today that three deaths had now been reported in relation to the switch.

"Sadly, CARM has also received three cases reporting death as an outcome. All three cases are under Coronial investigation because the cause of death in each case is unknown," the post read.

CARM went on to caution it was not yet known whether the brand switch was the cause of any of the deaths.

"Please note adverse reactions are reported to CARM based on a suspicion that the medicine could have caused the reaction. A causal link between brand changes of lamotrigine and the adverse reactions described here has not been established."

Last month, RNZ reported a woman feared her daughter's sudden death was linked to her switch to Logem.

The 23-year-old's epilepsy had been well-controlled for a decade but she died suddenly on the morning of September 20.

Pharmacy records and photographs taken by police investigating her death showed she had switched brands of lamotrigine. Her death has been referred to the coroner.

Pharmac instigated the brand switch, which will save it $30 million over five years, by pulling funding for the two main brands, Lamictal and Arrow, used by 90% of New Zealanders with epilepsy.

Pharmac judged there was a "high" likelihood of "reports of break through seizures, mood destabilisation or adverse effects in one or more patients being attributed to the brand change".

Medsafe had warned Pharmac not to make the drug switch, but the drug buying agency pressed ahead.

Pharmac has continuously stressed Logem worked exactly the same way as the two brands it previously funded and that most people would not notice a difference.

The agency said people who needed their old brand for clinical reasons could apply to have it funded.

"For many people, epilepsy is a condition which can be well-managed and has little or no impact on their life. For others, ongoing seizures mean that epilepsy has a long-term impact.

"Like many medical conditions epilepsy can be a cause of sudden death, although this is not common and is of course utterly devastating for family and whānau."

The obvious procedure is for general practitioners to state patients require the original for clinical reasons.

A family member attempted swtiching to this drug a year ago for her epilepsy and the transistion was unsuccessful, we're now thinking thankfully and we will be interested to hear the outcome of the Coronial investigation