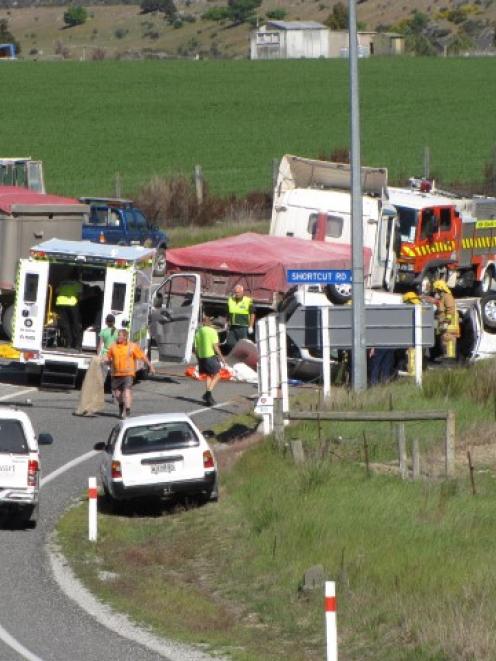 Emergency services at the scene of a fatal crash near Wanaka last month. Photo Mark Price
The Government has been accused of failing to do enough to prevent road crashes involving tourists, following the sentencing of a man who killed his mother and seriously injured his sister after he fell asleep at the wheel.

Hong Kong national Shu Na Lo, 27, is believed to have caused a head-on smash shortly after arriving in New Zealand for a holiday with his mother King Wai Vip, 66, and sister May Wong Kot.

The family had left Melbourne at midnight on September 30 and arrived at Christchurch International Airport at 5am. After hiring a car, they headed for picturesque Lake Tekapo.

But later that morning, on the State Highway 79 Geraldine-Fairlie road, with a 100km/h speed limit, it was believed Lo -- who has no memory of the crash -- fell asleep and caused a head-on smash.

His mum was lying asleep, without a seatbelt, in the back seat. She was thrown from the car in the impact and was found dead at the scene.

His sister suffered from serious injuries and was hospitalised for a month. She is still in a wheelchair.

Lo appeared at Christchurch District Court today, and was disqualified from driving for 12 months and ordered to pay the victim in the oncoming car $3500 for emotional harm.

Labour transport spokesperson Phil Twyford said the Government needed to stop brushing aside the serious issue of road crashes involving tourists and look at measures to reduce these unnecessary deaths.

"The Government has downplayed the importance of crashes involving tourist drivers, but every one of these needless deaths is a tragedy for the families involved.

"While the data seems to show tourist drivers are involved in road crashes at a proportionate rate similar to the general population, in some areas like Southland and Otago the incidence of tourist crashes is much higher."

Instead of ignoring tourist driver deaths, the Government needed to ask what it could do to prevent them, Mr Twyford said.

"The Government knows perfectly well it is simply lunacy to allow tourists to arrive from long flights and get straight into a rental vehicle, and yet they allow the process to continue unabated.

"Anyone who has arrived on a flight from overseas should not be able to rent a vehicle for 24 hours."

Mr Matthew-Wilson said the deaths would continue until the Government acted.