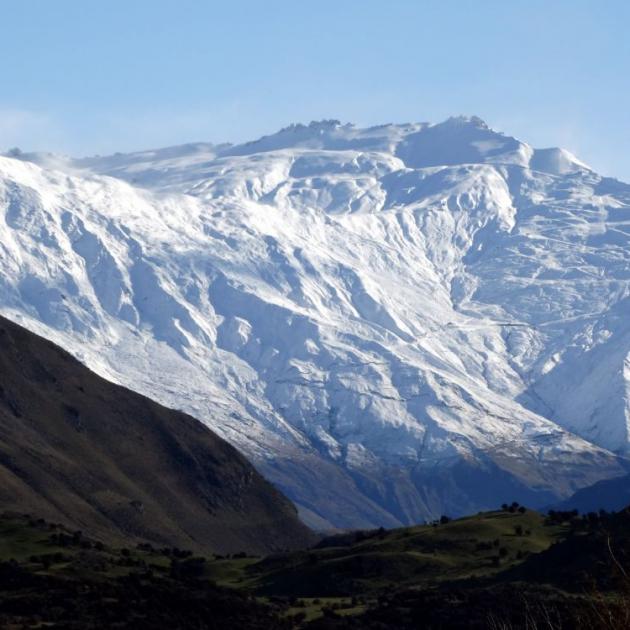 The group skied out to safety at Treble Cone. Photo: ODT files

A group of four skiers in an out of bounds area of Treble Cone skifield, near Wanaka, is safe after triggering an avalanche.

Treble Cone said the group triggered a ''size 2 avalanche'' about 12.30pm on Sunday in the Hidden Valley area, which was up to half a metre deep in open terrain, but the group were not caught in it and skied out safely.

''Before doing so they checked the debris and carried out a transceiver sweep of the site which did not reveal any signals,'' the statement said.

The group had also searched for visual tracks and any other clues outside of the area, and the full length of the debris, but did not find evidence of other individuals or groups in the area.

Following a phone call from a member of the public who saw the group searching the debris, Treble Cone initiated its own search and rescue procedures and informed Wanaka police.

A helicopter took two Treble Cone patrollers, along with two search dogs and two handlers, to the area and carried out a final search of the debris, with the area having now been been declared clear.

Heavy snow this weekend has raised the avalanche risk at mountains throughout the country.

A warning level of "considerable" meant conditions were dangerous and "conservative decision making" was essential.

In the Tongariro region, the safety council-operated New Zealand Backcountry Avalanche Advisory, issued on Saturday, reported there had been "substantial loading" of snow in eastern areas.

"We are in a very active weather cycle with high winds and increasing amounts of snowfall, during this period the rapid development of wind slab coupled with inclement weather will make route finding and avalanche assessment difficult," it stated.

"During the development of this slab there is a very good chance that a single skier could trigger an avalanche up to 1m deep."

The risk at Ohau and Two Thumbs in Mackenzie Country was "moderate", and "low" at Mt Hutt.

Parts of the South got a good dusting overnight, causing difficult driving conditions and some road closures. Motorists should plan their journeys after check the NZTA website before travelling.

State Highway 93 from Mataura to Clinton, where up to 20am of snow is reported to have fallen, was closed for much of Sunday but had reopened by 4pm.

State Highway 6 between Makaroa and the Neck of Lake Wanaka is set to remain closed until Monday due to a major slip covering both lanes.

The Desert Road in the central North Island is also closed, with warnings of blizzard-like conditions predicted to hit south of the volcanic plateau. Heavy falls were expected down to 700m in Taumarunui and Taihape, with up to 10cm of snow forecast. Drivers are also urged to take care on the Napier-Taupo Road.

There are road warnings in place because of snow and ice, including black ice on SH6 between Queenstown and Cromwell,  Arthur's Pass, Lindis Pass, Lewis Pass, Dunedin, Mosgiel, Palmerston, Canterbury, Takaka, near Hanmer, near Nelson and on the West Coast.

Widespread ice and snow warnings are still in place across the region. Please check before you go: https://t.co/IgO5co3NYu #Snow #Ice ^MF

The MetService said a trough crossing New Zealand on Monday will bring rain to the west, and is likely to bring more snow to the South Island.

"Thunderstorms are possible over the upper North Island. Snow showers may also fall on the lower hills of Southland and Otago."

The forecast said on Tuesday, a ridge will move slowly east across New Zealand. On Wednesday or Thursday another trough risks bringing heavy rain to Mt Taranaki, the Tararua Range and the ranges of Nelson, Buller and Westland.

The Queenstown Lakes District Council warned there's ice and snow on the ground throughout the region and a high risk of more ice forming and snow expected.

The Crown Range Road linking Queenstown and Wanaka reopened at 9.30am on Sunday, but all vehicles should carry chains, the council said.

Roads through the rest of the Wakatipu have been affected by snow and ice.  Crews worked overnight to clear roads and all main routes have been gritted. Contractors were also working on secondary roads and suburban streets.

Ice warnings remain for Arthur's Point, Fernhill and the steeper streets on Queenstown Hill as well as SH6 through the Kawarau Gorge. Roads in the Wanaka area may still be icy.

Snow started falling about 7pm in Southland on Saturday. The worst affected areas were SH93 Old Coach Road and SH94 Gorge Hill. One vehicle trapped on SH93 was helped out with a grader, the NZTA said.

Grader and gritting crews have been working in the Ohai area, Jollies Hill, Gorge Hill, Arthurton to Invercargill and manning the road at both ends of the closed SH93 Mataura to Clinton. Lumsden remains potentially very icy.

The Canterbury-West Coast alpine passes (SH7 Lewis ie Hanmer to Springs Junction and Springs Junction to Reefton and SH73 Arthurs/ Otira), also Lindis in South Canterbury, are open but chains are essential. Conditions can deteriorate quickly. No towing vehicles on the Lewis and Arthur's Pass routes.

- By Simon Hartley and NZME