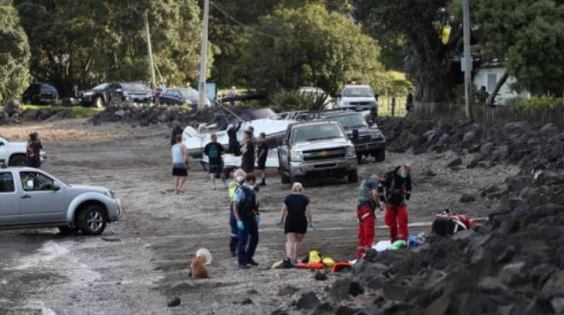 Emergency services at the scene on Sunday. Photo: NZ Herald
Police have released the names of the three people who died in a boating incident in Auckland's Manukau Harbour at the weekend.

A fourth man (23) was airlifted to Auckland Hospital in a moderate condition but has since been discharged.

Emergency services were called to the harbour on Sunday after reports of a boat overturning.

It's understood other boaties found three people dead in the water and rescued the fourth.

The Transport Accident Investigation Commission (TAIC) has launched an inquiry and is appealing for witnesses to the accident.

Police said they were supporting the victim's families.

The survivor was being supported and has provided information that will be used to assist the investigation.

"Police are into the early stages of an investigation to establish how this tragedy occurred and the matter will ultimately be referred to the Coroner.

"We are working with TAIC and Maritime NZ to understand the factors that caused this accident."

One local man who saw the recovery operation unfold 100m from his boat said the capsized vessel was "in the worst place in the harbour to be" and he is glad an inquiry has been launched.

"Some bigger boats that were already moored at Huia came out and gave [first responders] assistance," he said.

He followed a larger boat as it took the bodies back to shore and said emergency services performed CPR but they were pronounced dead.

The man said he helped clean up life jackets and other wreckage from the boat.

He said the mood was sombre back at the beach.

He had been among more than 200 boats who successfully crossed the Manukau bar that day.

The deaths have been described by Coastguard as the worst tragedy on that body of water in many years.