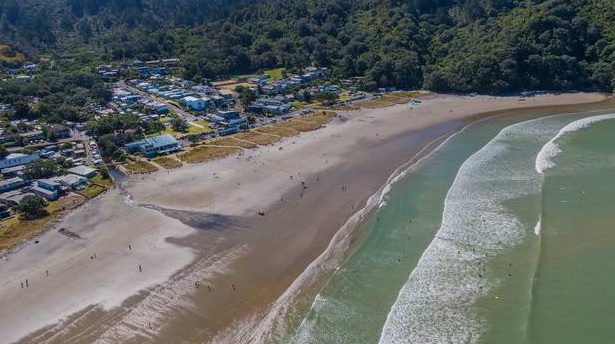 Authorities are investigating what caused warning sirens to go off in Bay of Plenty. Photo: NZ Herald
The head of the fire service has apologised for the panic caused by a tsunami false alarm last night that caused residents in Bay of Plenty and Waikato to seek higher ground.

Panicked Waihī Beach residents evacuated after hearing sirens starting about 9.30pm. They were also heard in Mt Maunganui, Te Puke, Ōmokoroa and other parts of the Bay of Plenty as well as parts of Waikato.

It was later confirmed by Fire and Emergency New Zealand (Fenz) that it was a false alarm.

Fenz chief executive Rhys Jones has just apologised for the error. He couldn't say if it was human or a technical error at this stage, but they would be investigating further.

Civil Defence is also investigating what caused the sirens to go off.

Revelations of the false alarm did little to calm those who had already been evacuated and residents who wanted to ensure that it was in fact a false alarm.

"This is poor. Even though it was a false alarm, measures should be in place. Poor families carting their children and belongings on foot to a safety point," one resident wrote online.

The latest update from Bay of Plenty Civil Defence - issued just after 4am - said Fenz was due to investigate more this morning.

A statement released by fire authorities said: "We are focused on working alongside our partner agencies to find out what caused these sirens to activate.

"The activation was an error and there was no danger to the public."

Residents affected have taken to social media to vent their frustrations at the false alarm and what their families went through last night as a result.

One woman said they were holidaying in Waihī Beach when they heard the siren go off, but did not know what to do or where to go.

"Quite unnerving to discover that some Waihī Beach residents evacuated immediately whilst we were standing around wondering what the siren meant and what to do.

"It appears that many of the communication measures in place to manage emergencies rely on technology and local knowledge."

Witnesses said cars filled with panicked people were streaming out of Waihi Beach and local Facebook group pages were flooded with concerned comments.

An evacuee told the New Zealand Herald she and her family were staying at Waihī Beach when an alarm began to ring out.

"A siren started and we were wondering what it was, and then someone on loud speakers said we needed to evacuate as there was a tsunami," she said.

Other locals reported they had not received any text alerts or notifications telling them what to do, where to go or that it was even a false alarm.

However, Bay of Plenty Civil Defence said on its Facebook page that had there been a genuine risk of a tsunami approaching, or other emergency situation, they would have used all avenues to alert people in the area.

"In an event, we use multiple alert notification tools, not just Facebook. Even then, people need to look out for one another though as no tool is perfect."