Contrasting styles: Ardern and Trump speak at the UN in 2018

Prime Minister Jacinda Ardern has loosened herself a little from diplomatic strictures to describe Donald Trump's presidency of the United States as "tumultuous".

And she expressed a desire on behalf of the whole world for a more settled period under new US President Joe Biden who was sworn in today after Lady Gaga sang the national anthem at the US Capitol.

Ardern said everyone benefited when there was healthy debate and where "you don't see too much heavy partisan tribal politicking that leads to unrest."

Ardern as an ordinary Opposition MP joined a global feminist march in Auckland to vent against Trump's election in 2016.

But she has remained circumspect since becoming Labour leader and Prime Minister in 2017 and any criticism has been guarded.

She told reporters in Nelson today that it was obvious that in politics, people had different perspectives than many of the world leaders they had to work with.

"But our job has always been to make it work on behalf of our countries. It is obviously a lot easier to do that when you have a few more shared values. " 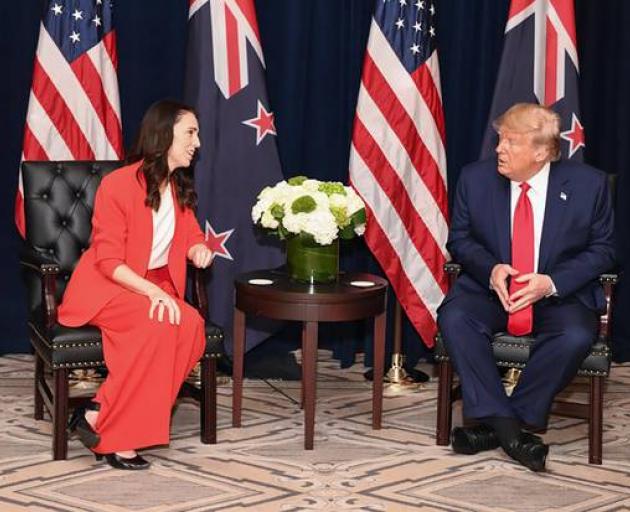 Asked how she would describe Trump's term in office, she said: "There is no question. The history books will tell us it has been tumultuous.

"Regardless of where we are on the political spectrum, I think we all benefit [from] … healthy debate, where you don't see too much heavy partisan tribal politicking that leads to unrest.

"I really hope that on behalf of the globe we see a more settled period but one in which ideas are still contested."

Ardern spoke to Biden by phone last year about three weeks after the election and said today it had been "brilliant" to convey New Zealand's congratulations directly then.

Biden's White House spokeswoman told reporters he would begin new calls with allies and partners later this week. He marked his first day in office by rescinding many of Trump's decisions and has rejoined the Paris Climate Accord.

Earlier today Ardern issued a statement of congratulations, saying the US and New Zealand had shared interests in climate change, the Covid-19 economic recovery and sustainability of "the Indo-Pacific" – she chose the term which has supplanted "Asia-Pacific" and rankles with China.

"Under his presidency, the strong and close relationship that New Zealand enjoys with the United States will continue to develop and flourish," she said.

Biden was a foreign affairs specialist in his long tenure in the US Senate. He visited New Zealand as Vice-President in 2016 to announce the first US Navy visit in 33 years and the end of reprisals for the anti-nuclear policy.

Kurt Campbell, former Assistant Secretary of State and one of the key figures in the Obama Administration to improve relations with New Zealand, has been appointed to Biden's National Security Council with responsibility for the Indo Pacific.