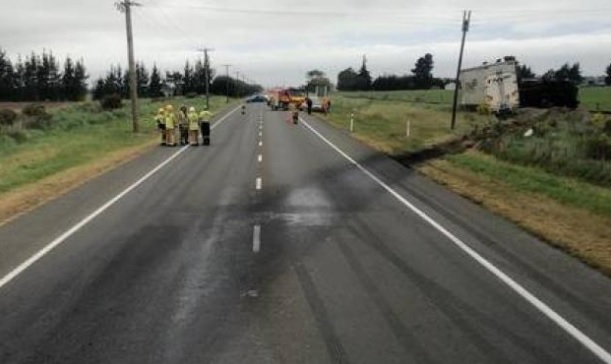 Emergency services at the scene near Rakaia on Sunday. Photo: Bridget Shimmin via NZ Herald
Two Australian women were killed in a head-on collision between their rental car and a freight truck  in Canterbury at the weekend.

Police have confirmed that two Victorians, aged 56 and 58, were killed in the crash on Sunday.

Their names have not yet been released.

News outlet Stuff reported the women's car veered across the road and into the path of the truck between Rakaia and Dunsandel, south of Christchurch.

The truck's driver was not injured, despite the vehicle skidding through a fence on a grass verge, and tipping on to its side on railway tracks.

His company, TIL Freight South Island, said the man suffered emotional trauma and was receiving counselling.

A car travelling behind the women was also caught up in the crash, leaving the occupants with minor injuries, while another car further back was struck by debris.

Ambulance staff treated people at the scene for minor bruising but none needed to be taken to hospital.

Police acting area commander for rural Canterbury Natasha Rodley is quoted in the report, saying it was not certain what had caused the women's car to cross over the road's central line.