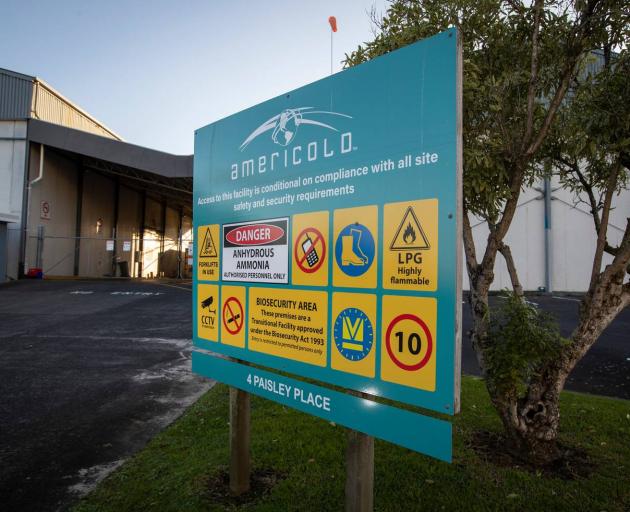 There are four cases at Americold in Mt Wellington in Auckland. Photo: NZ Herald
There are two new cases of Covid-19 at an Auckland coolstore.

The new cases bring Americold's total cases to 13 while the Auckland cluster itself grows to 19.

Five direct cases are workers, while seven others are family of infected plant staff.

However, Americold managing director Richard Winnall today the Herald today they were still waiting for the results for 14 other employees - 13 of whom who work at their Mt Wellington site where a man had tested positive.

Winnall said that staffer, at the centre of the outbreak along with three other family members, worked night shifts which may have helped limit the spread of the virus.

"The test results are coming in quite slowly which is frustrating. We have had since last night and this morning, two further positive Covid results back related to this site.

"One was an agency hire labour worker, who is not a direct employee, but works with us during busy times."

That person was hired by Labourforce.

Winnall said while he couldn't 100 per cent confirm the agency worker had worked at other companies but it was his understanding he was only working for Americold, but he wasn't sure how far that had been traced.

"At this stage I'm told it's just an Americold thing."

He said each of the positive cases were all in isolation, doing their contact tracing, and following all other instructions.

"I'm very proud of them for that."

Winnell said for the sake of the health of his staff, he hoped that more test results could come back for the remaining 14.

"Obviously people's anxiety, getting the test results back for all of our staff is our number one priority.

"That is not complete yet for the shut sites. We have one result pending from our Auckland Airport site. All other sites at that site have been negative.

"At the Mt Wellington site, we have approximately half of the 27 employees there still to receive results and that was the first site.

"These are the first people tested in Auckland and I'm still waiting on results there, so that leaves anxiety with the team and the managers are trying to support them."

He said while the wait was surprising and frustrating he was sympathetic to the strain on the testing regime at the moment.

"Obviously the testing for our employees has got caught up in the mass and has slowed down, it is frustrating but I understand."

As for getting testing done inside his facility, as had been mentioned by director general of health Dr Ashley Bloomfield in recent days, Winnall said nothing had happened yet.

"As of right this minute there has been no swab testing. I believe that they are trying to determine how to do that, test and interpret the results."

He also believed there had been a "swing of focus" towards more person to person transmission as opposed to his staff member getting it at work.

"We're working with the Ministry of Health to either test and clear this or publicly declare this as being highly unlikely based on their other evidence."

Over the past 18 hours, Bloomfield said it was more likely that original transmission was "person to person".

Auckland was put back into alert level 3 lockdown on Wednesday after the ministry revealed that the four South Auckland family members had tested positive.

There was currently no known link to overseas travel or managed isolation, and the source of infection is unknown.

One of the four worked at the Mt Wellington plant and another at Dominion Rd company Finance Now.