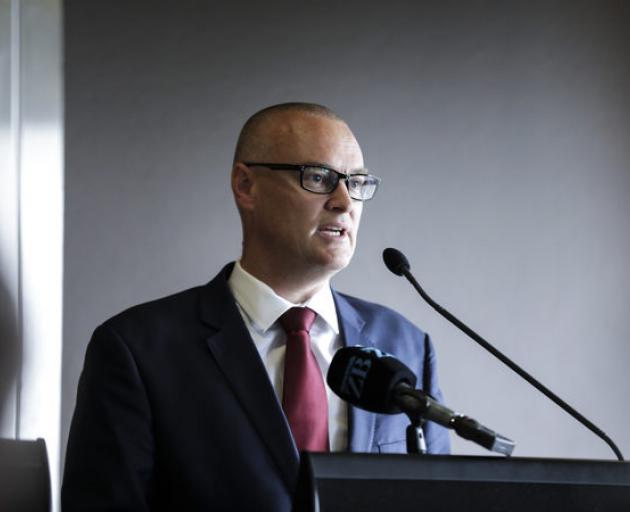 Health Minister David Clark at today's announcement. Photo: RNZ
The Government is responding to dozens of synthetic drug-related deaths in the last year by cracking down on suppliers and boosting funding for addiction treatment services.

In July this year, the Chief Coroner reported that between 40 and 45 people had died as a result of taking the drugs and the then-Acting Prime Minister Winston Peters instructed officials to come up with a plan.

Health Minister David Clark said this is "not the full decriminalisation of drugs recommended by the Mental Health and Addiction Inquiry''.

"There are immediate steps we can take in response to the challenge we face with synthetics. We are considering the Inquiry's recommendations separately,'' Dr Clark said.

The inquiry reported back last week but the Government won't formally respond to its recommendations until March next year.

The Government has today announced the two most common synthetic drugs (5F-ADB and AMB-FUBINACA) will be classified as Class A, giving police search and seizure powers and making suppliers subject to sentences of life imprisonment.

A temporary drug classification will be created for new drugs, bringing them under the Misuse of Drugs Act.

An amendment to that act will instruct police to use their discretion and not prosecute for possession and personal use where a therapeutic approach would be better.

"Under current laws synthetics and other dangerous drugs are killing people and fuelling crime while dealers and manufacturers get rich. The current approach is failing to keep Kiwis safe and can't be continued," Dr Clark said.

"It's time to do what will work. We need to go harder on the manufactures of dangerous drugs like synthetics, and treat the use of drugs as a health issue by removing barriers to people seeking help."

"I expect police will continue to prosecute people for possession when appropriate under the guidelines announced today. It is not a black and white exercise to distinguish between users and dealers. Factors include the seriousness of the offence, if there are victims, if safety of others is at risk from the drug use, if there is public disorder, and if the evidence is sufficient to justify a prosecution,'' Mr Nash said.

"We are striking a balance between discouraging drug use and recognising that many people using drugs need support from the health system, or education about harm reduction. We don't want our jails full of people with addiction problems, we want those people getting treatment.''

The Green Party said the approach is an "evidence-based step to reduce drug harm, drug demand, and drug supply''.

A total of $8.6 million has been set aside for an Acute Drug Harm Response Discretionary Fund over four years, which will be available immediately.

The fund will help respond to surges in overdoes or deaths and help people tackle problems in their lives, like homelessness, that are driving their addiction.

Up to a further $8 million will be used from the proceeds of crime to establish a Drug Early Warning System to provide intelligence and data to inform the discretionary fund, fund other drug and alcohol initiatives and provide addiction training in communities affected by synthetic drugs.

More than 50,000 people access addiction treatment services in New Zealand each year - most are treated in intensive outpatient services.

The total cost of addiction treatment services is $150 million per year and research suggests about 150,000 people could benefit from intervention.