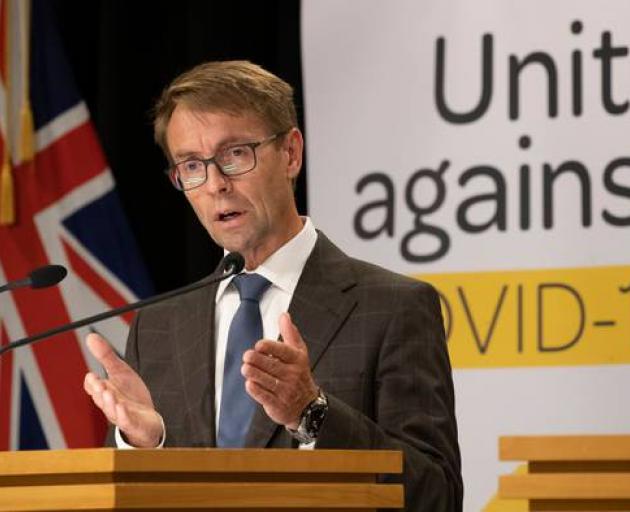 Director-general of health Dr Ashley Bloomfield. Photo: ODT files.
The Government is facing heat over the number of frontline MIQ workers who have yet to be vaccinated and has set a hard deadline as to when they need to get the jab.

Prime Minister Jacinda Ardern warned the bar for these workers not getting the Covid-19 vaccination before the end of the month was "very high".

"There is essentially no reason that we consider acceptable."

She confirmed yesterday that 86% of MIQ staff — some 3472 workers — had received the vaccine.

That left 538 people in this cohort who still needed to be vaccinated.

These workers now had until April 30 to be vaccinated, or be redeployed.

"If there is not an option to redeploy them, then it will be up to the employer to work through what happens with that individual, but they cannot work in MIQ."

Act New Zealand leader David Seymour said waiting that long was unacceptable, given the risk of another community outbreak.

He said the Government should use the powers afforded to it under the Covid-19 Act to tell unvaccinated frontline MIQ staff if they had not had the jab by this Sunday, "don't come in on Monday".

"Stop pussyfooting about and take the necessary steps to protect New Zealanders and the economy from another outbreak of Covid-19," he said of Ms Ardern.

"You can't immediately withdraw 10 or 20% of your workforce and still run the facilities."

Speaking at 1pm media conference yesterday, he was not able to say how many frontline workers had not yet been vaccinated.

The workforce was "changing all the time".

"So it's a very difficult thing to pin down exactly how many people haven't been vaccinated."

But by 4pm, Ms Ardern was able to provide a specific number.

She said 3472 out of 4010 MIQ workers had been vaccinated and more information would be provided today.

This figure did not, however, include airport workers, port workers and other Government employees working on the front lines but not directly in MIQ.

But it did take into account the private contractors, such as security, the Government paid to work at MIQ facilities.

It was with security that the issue of frontline workers not being vaccinated was brought into focus.

They had not received the vaccination and had missed two appointments.

Yesterday, the Ministry of Health reported another security worker, who had worked the same shift as the first Covid-positive worker, had also contracted the disease.

They, too, had not received the vaccine but were unable to get one as they had been in self-isolation since the first security worker tested positive, Dr Bloomfield said.

Asked why there were still MIQ and frontline workers yet to be vaccinated, Dr Bloomfield said: "Because it's a large workforce".

There were a "range of reasons why people haven't been vaccinated", Dr Bloomfield said.

As of the end of last week, First Security had 79% of its workforce vaccinated.

Ms Ardern said yesterday this number needed to be 100% by May 1, or "they will need to withdraw those workers who are currently in our MIQ facilities".

In a statement, First Security said it had met all the Government's Covid-19 health and safety obligations around MIQ.

"We have done, and continue to do, everything possible to ensure all employees working at MIQ facilities are vaccinated by the April 30 deadline set by MBIE, while acknowledging employee rights."

In terms of those workers who had not been vaccinated yet, Dr Bloomfield said they were at the "head of the queue" in terms of having conversations with employers about redeployment.

"But they won't have been required to be redeployed yet."

Mr Seymour said it was unacceptable they could still be working at MIQ facilities unvaccinated.

"The Government won't play hardball with unions and force those employees unwilling to get a Covid vaccine to vacate MIQ premises for another 17 days."