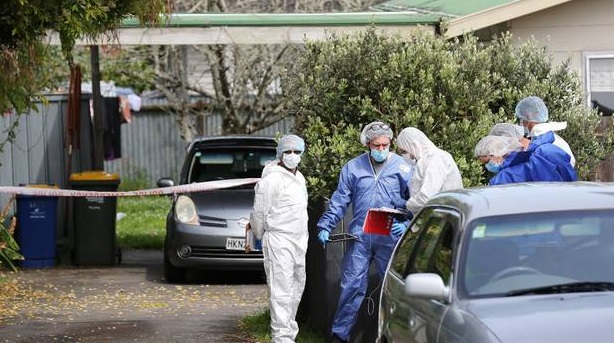 Investigators at the scene after the incident. Photo: NZ Herald
An Auckland van owner who was injured while trying to stop two people from breaking into his van - one of whom later died in hospital - was acting in self-defence, police say.

Police say Jason Murray, a 36-year-old from Te Atatu, is believed to have died as a result of injuries he received following a fight with the van owner early on Sunday.

Police were still investigating, but the owner was acting in self-defence at the time, Detective Senior Sergeant Kim Libby said.

"As we have previously stated, police believe Mr Murray and a second person were attempting to break into a van at a Te Atatu address before an altercation took place between himself and the owner of the van.

"The van owner has been fully cooperative with Police and we have spoken with him as part of our investigation, while we have also spoken with a number of witnesses.

"Enquiries to date lead Police to believe that his actions were in self-defence. He is understandably distraught and we are ensuring that he is provided with support and welfare at this time."

"We urge them to come forward and speak with us."

Neighbours told the New Zealand Herald they heard glass smashing and car tyres spinning as a getaway driver fled, leaving his alleged accomplice fighting with the owner of a van they are thought to have been trying to break into.

The owner of the van was taken to Waitākere Hospital in a moderate condition, but was discharged later that day.

Libby said Murray's death was 'a tragic outcome' and his family have been provided with support.