Wellington back to business after quake 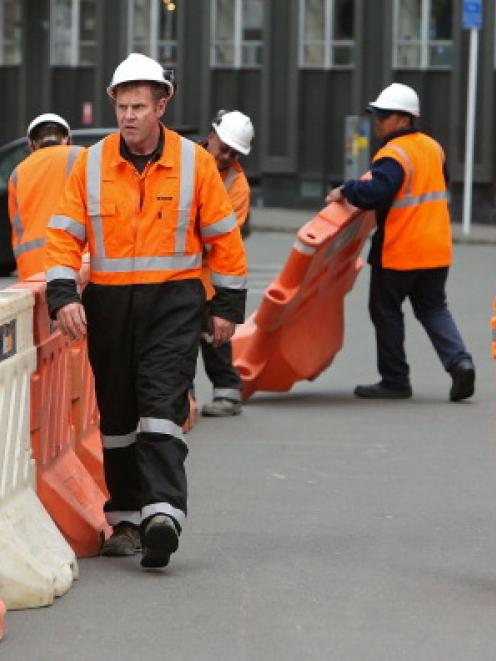 Workers at a cordon on Maginnity Street after surrounding buildings sustained earthquake damage. (Photo by Hagen Hopkins/Getty Images)
Workers and shoppers are returning to Wellington today after many businesses closed their doors in the wake of Sunday's violent earthquake.

Mayor Celia-Wade Brown said there was still a fair bit of cleaning up to do, with 12 buildings cordoned off over concern of falling debris and glass.

Some workers would return to find their "papers refiled on the floor'', Ms Wade-Brown said.

The Fire Service, Police and Urban Search and Rescue workers had been stood down or returned to normal duties, she said.

Aftershocks continued to rumble overnight after Sunday evening's magnitude-6.5 earthquake, with the strongest measuring magnitude 5 striking about 1.30am.

The chance of an aftershock measuring up to 6 in magnitude in the week following the quake remained at 19 per cent.

Of the nearly 2500 buildings inspected, engineers discovered about 35 with superficial damage, but Ms Wade-Brown said there may be more problems that have yet to come to light.

Three major car parking buildings in the central city remained closed while they were inspected for possible structural damage.

The earthquake was a "very important warning'' to the city, Ms Wade-Brown said.

Following Christchurch's lead, some of Wellington's students had volunteered to clean up the mess.

The council, however, refused to give the Herald a list and map of buildings that were still unsafe yesterday due to "accuracy issues".

"If we give it to you in its current form we could all be sued by building owners whom we wrongly target," a spokeswoman said.

Greater Wellington Regional Council chairwoman Fran Wilde said the city's port was to reopen last night after the quake caused about five metres of reclaimed land to subside into the sea at Thorndon Container Terminal, taking with it a large container and a large buoy.

PM to visitors: Don't be put off

Prime Minister John Key assured quake-hit people the Government would do its "very best'' to ensure they get the support they needed.

Mr Key said that, in principle, New Zealand could afford to pay for the damage caused by another earthquake.

He also urged international visitors not to be deterred from trips to the capital.

"One of the real risks, I think, is that the international community grows a perception that New Zealand is overly earthquake-prone and that somehow deters them from wanting to visit.

"This is very different to what happened in Christchurch. One of the messages to get out there is that we have come through this well. The country is in good shape."

GNS Science seismologist Ken Gledhill said the quake was a "one-in-several-decade event'' but only a 10th of the size of the February 2011 Canterbury quake.

Dr Gledhill said the many aftershocks still rocking the bottom of the North Island and top of the South were normal.

"This is not unusual behaviour for the Cook Strait region. It's following the pattern we would expect.''

The three big earthquakes that struck the region since Friday were all centred between 10km and 20km below the sea floor in the Cook Strait, he said.

Dam to be inspected in Seddon

Meanwhile a quake-damaged dam in Seddon, near the epicentre of Sunday's quake, will be further examined shortly, but it's now not thought to be a threat.

It had been thought that Sunday's 6.5 magnitude earthquake had put cracks in the dam, and Haldons Road was closed overnight as a precaution.

The road is now open and a further examination will be done by a dam engineer later this morning.

Many residents of Seddon have spoken of their anxiety since the tremor hit.

Joan Dodson spent the night in her four-wheel-drive outside her earthquake-damaged home on Cable Station Road, near Seddon, following the quake and has not returned since.

Mrs Dodson and her husband Rex, both decided against returning to their wooden villa after the quake forced the couple, in their 70s, onto their lawn.

The couple's home is one of the closest to the epicentre of the quake in Cook Strait.

Mr and Mrs Dodson said the quake "blew the wind'' out of them.

Weld Street resident Jeanette Andreassend said televisions and computers in her home were all damaged.

Mrs Andreassend, a Blenheim Countdown service administrator, said her microwave ended up in the middle of the kitchen.

By yesterday she had filled three black rubbish sacks with belongings that were broken during the quake.

Mike Uren, a volunteer with the local fire service, said checks of local homes had not turned up any serious damage.

"Like in all small communities, people are banding together. "It's a very sobering situation but I think most people have come through it,'' he said.