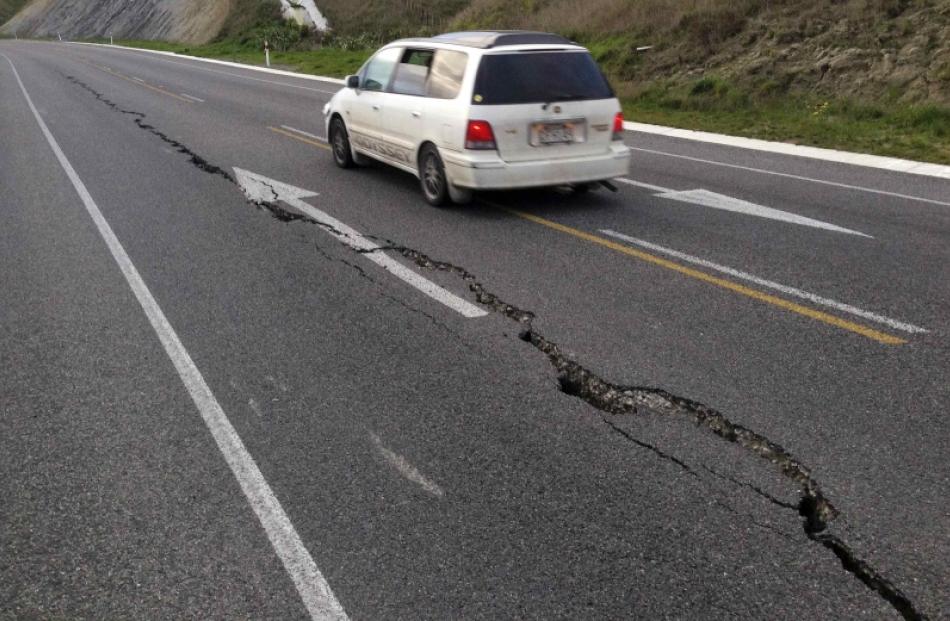 A car drives past a crack in a road after an earthquake on the outskirts of the town of Seddon in the Marlborough region. Photo by Reuters

Wellingtonians shaken by yesterday's magnitude 6.6 quake are being warned to expect aftershocks for the next few days.

Scientists last night said they were surprised by yesterday's 6.6 quake, as it was unusual to see a doublet of similar-sized jolts.

But while they can't say if or when a third plus-6 magnitude quake will strike, they are warning that decent-sized aftershocks will continue in the short term.

"We are definitely expecting it to be quite vigorous in the next couple of days, and then it will die off," GNS seismologist Dr Caroline Little said last night.

They also say there is no certain way to tell that The Big One won't strike the region.

The severe earthquake rocked the upper South Island and lower North Island yesterday afternoon and sent workers in Wellington running into the streets as the ground shook and buildings swayed from side to side.

GNS confirmed the earthquake at 2.31pm was a magnitude 6.6 and was just 8km deep, 3km shallower than the magnitude 6.5 quake which hit the Cook Strait last month.

It was centred just off Seddon at the top of the South Island, causing significant damage to houses and infrastructure in the region.

This morning Civil Defence, police and fire reported a quiet night in Wellington.

The Wellington CBD was open for business this weekend - although people were advised to pay attention to any cordons.

A nine-storey lift shaft attached to the James Smith car-parking building is to be demolished immediately, with engineers and a large crane on site.

Wellington City Civil Defence Controller Stavros Michael said council inspectors and the police would use "dangerous building" provisions of the Building Act to require the evacuation of buildings immediately surrounding the lift shaft.

Civil Defence has found temporary accommodation for about 30 people.

All council facilities, including libraries, are open.

Surveillance of the city by council building officers and inspectors did not identify any substantial damage, and building owners had engaged structural engineers who were working through the weekend to prepare for business as usual on Monday.

All major utilities and infrastructure have been inspected and they are operating as normal.

Trains and buses were operating as normal.

Wellington Mayor Celia Wade-Brown said people should enjoy their normal weekend activities as much as possible.

Ms Wade-Brown said both the Downtown Community Ministry bookfair and the Kirk's sale were starting today.

"The city is operating as usual, sportsfields and recreation facilities are open - get out there and enjoy them."

The NZ Transport Agency (NZTA) was aiming to have State Highway 1 between Seddon and south of Ward reopened by midday as crews worked to repair long cracks in the road surface.

Marlborough Roads Manager Frank Porter said the earthquake opened up several large cracks in the road, and contractors were working to get them filled as soon as possible.

"If we do the job in one fell swoop then that reduces the overall disruption to motorists, and the troops are working as fast as they can to restore access for everyone.

"We know this is frustrating for the motorists and truckies who rely on this lifeline, and we hope to provide some welcome relief very soon."

Mr Porter said once the road was reopened there was likely to be further roadworks to patch up the highway, and delays were likely throughout the day.

Hundreds of Wellington commuters were left stranded following the quake, with the rail network crippled and 11 commuter trains stuck between platforms for up to an hour.

The mass exodus from the city also caused traffic chaos in the suburbs as drivers tried to avoid the motorway and get home via back streets.

The NZTA said pedestrians stranded in the city were walking along the motorway between Wellington and Petone.

Damage appeared to be restricted to the Manners Mall, Cuba St and Featherstone St areas of the CBD, where there is broken glass on the roads.

The upper South Island felt the full force of the earthquake, with homes in Marlborough seriously damaged.

Laura-Jean Kerslake was asleep when the quake struck and had to run from her crumbling heritage home in Seddon.

The 1874 cottage, where she lives with her parents and infant son, partially collapsed in the tremor.

Ms Kerslake said everyone else was out of the house and she managed to get out without being hit by falling debris.

"It was terrifying," she said

Geonet figures show there had been over 100 aftershocks since yesterday's magnitude 6.6 quake with at least six reaching magnitude 5 or greater.

- by Brendan Manning of APNZ/Jamie Morton of New Zealand Herald