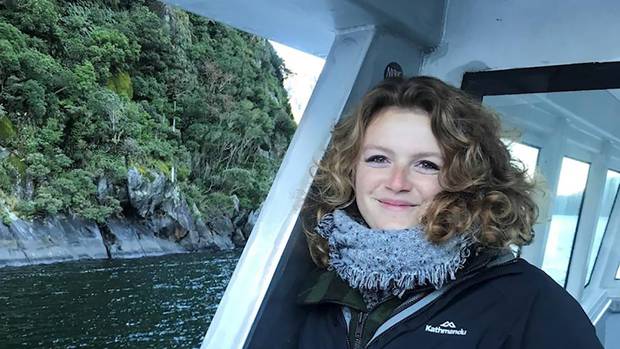 Tour guide Kelsey Waghorn was on the active volcano when it blew. Photo: Supplied

Whakaari/White Island  survivor Kelsey Waghorn has shared photos of her recovery online two months on from the disaster.

Waghorn has undergone more than a dozen surgeries, with skin grafts to her arms, legs, hands and lower back, with some touch ups on her upper arms.

One picture shows the 25-year-old's arm and a patchwork of skin grafts and scar tissue.

A sliver of her tattoo peeks out from underneath the burned skin.

I planned this tattoo for two years. I got it the morning of the @foofighters concert in 2018 and was in love with it. I was always asked “what is your tattoo?” I guess that question will now be “what was your tattoo?” Sorry, @phoebej_tattoos @7thday_studio, guess I’ll have to come back in a couple years for a touch up 😅

"I planned this tattoo for two years," the caption read.

"I got it the morning of the Foo Fighters concert in 2018 and was in love with it.

She joked she will need a touch-up in a few years.

Waghorn said she spent Christmas Day bundled up in bandages, but with the ones she loves.

The guide awoke in hospital to full thickness burns to 45 percent of her body.

She'd spent 10 days in ICU, five of those in an induced coma after the island spewed ash, steam and toxic gas on December 9.

Twenty-one people were killed when the volcano blew, among them Waghorn's colleagues Hayden-Marshall Inman and Tipene Maangi.

Earlier this week, Waghorn told The Rock she didn't remember the "gnarly stuff".

"My family, they didn't have that luxury of being doped up to the eyeballs for the first 10 days," she said.

She remains in Hutt Valley Hospital.

"I am slowly regaining the use of both of my hands - my right is worse than my left. But I'm working on that every day," she wrote in a recent update on her Givealittle page.

"Everything is healing twice as fast as anyone predicted, and although I have my moments, I am proud of the huge progress I have made.

"I'm covered in scars and relocated skin, and that's okay with me."

She's had skin grafts described to her as a "big biological plaster," she told The Rock.

"So I'll never sweat, I won't grow hair from there, my body won't exude oil through my skin normally."

I’m only just starting to accept that you didn’t make it off the island with us. Of all people, I never dreamed it would ever be you. Thank you for everything you have taught me over the last five years. I will never forget your laugh, your lessons and your love. I’ll never watch a game of rugby or drink a Steinlager without thinking of you, my annoying big brother. Look after those who step into Whakaari like you taught so many of us crew to do x

Another post pays tribute to colleague Hayden Marshall-Inman, who was lost at sea.

"Of all people, I never dreamed it would ever be you ... Look after those who step into Whakaari like you taught so many of us crew to do."

Waghorn said she cried when she saw how much had been donated to her Givealittle page, where donations now soar over $100,000.

"I wouldn't be here without you."