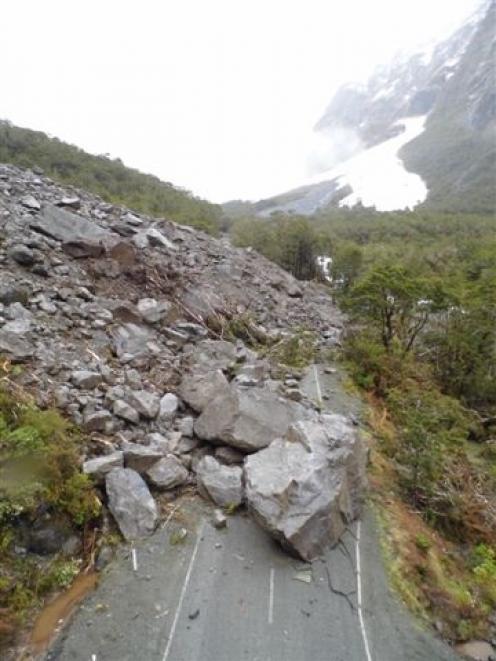 Milford Road has been blocked by a slip that sent rocks - some the size of small cars - tumbling down a hill. Photo from Downer.
Debris and rocks as large as small cars have blocked the Milford Rd following a major landslide overnight Friday at an section known as "Red Slip".

The road was closed by the New Zealand Transport Agency at 4pm yesterday due to extreme weather and the slip occurred within the boundary of the closed section, estimated to be 2km on the Milford side of Falls Creek.

The NZTA believed there had not been a slip in that area for 25 years.

NZTA Southland area manager Peter Robinson said tourism operators were warned yesterday the road would be closed and "most people were evacuated from Milford" before its closure, as the road is the only land-based entry and exit to the popular tourist area.

Passengers on an overnight Real Journeys cruise were expected to be docking in Milford today, and Mr Robinson said it was likely the company would be flying them out.

A spokesman from Southern Discoveries confirmed their customers would be flown in and out.

Mr Robinson said geotechnical experts were today assessing the risk of another landslide from unstable rocks above the road. Once any risks had been cleared work would begin on clearing the debris blocking the road.

Contractors with rock breaking equipment are on standby and could arrive from Christchurch, pending the outcome of the assessment.

It is thought some of the large rocks have damaged the road beneath, and he said the road would be closed "definitely [for] a few days".

"Until we have had the assessment we don't know how long it's going to take [to clear]."