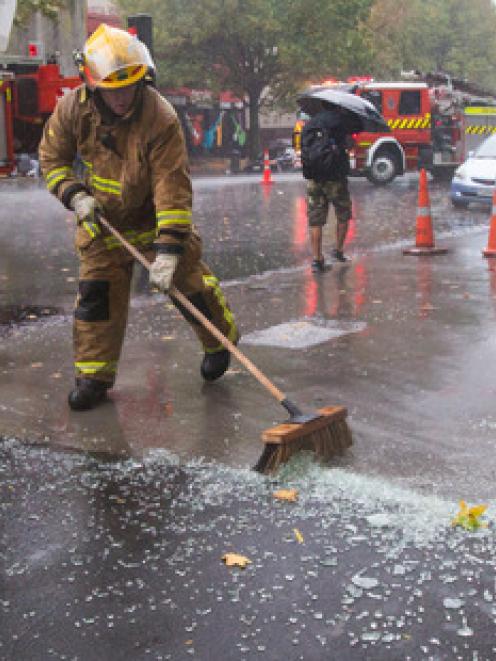 Firemen sweep up the mess at the Fiore on Auckland's Hobson St after a glass pane on the verandah roof blew in and smashed on the pavement. Photo: NZ Herald
One young Auckland family had a lucky escape after a tree was blown down on the front of their car this afternoon, as wild weather hits the region.

Strong winds have brought down signs and blown out glass in Auckland as the tail of a deadly storm that lashed New South Wales last week is whipping its way through the country today.

WeatherWatch said the low-pressure system would bring isolated thunderstorms along the Tasman Sea, strong to gale force northwesterly winds to central and eastern areas and periods of heavy rain and showers for northern and western New Zealand.

Pamela Amorim and her 2-year-old daughter Nicole had driven to AUT's North Shore campus and stopped briefly to pick up her husband Murilo from the library.

She parked as close to the entrance as possible for convenience but it turned out to be anything but a simple pick-up.

"I just parked there because it was raining so he could come straight into the car, and the tree came down on us, so it was quite scary," Mrs Amorim said.

She said she froze as the trunk came down on the vehicle's bonnet and windscreen, before pulling her daughter out of her car seat and seeking refuge in the library.

Mr Amorim said he "just ran and tried to help them".

The incident was one of dozens that North Island fire crews had attended today, while wild weather battered most of the country.

The gusts blew out a window on central Auckland's Hobson St this morning and Northern Fire Communications shift manager Dallas Ramsay said there were several reports of tiles lifting off roofs.

The Fire Service in the upper North Island was called out to some 35 incidents caused by the strong winds caused before 1.45pm.

Most of these were in Auckland and involved trees down and power lines arcing.

WeatherWatch said there was a risk of thunderstorms striking Auckland later this afternoon.

"It's going to get pretty hairy in places today --as several systems are going to influence conditions around the country in the form of both rain and wind," forecasters wrote on weatherwatch.co.nz.

The site said there was also a chance of thunder in Taranaki, where conditions were even "ripe for forming a small funnel cloud or tornado at some point."

MetService issued a warning for heavy rain to fall in Westland and the ranges of Nelson and Taranaki, which could cause streams to rise rapidly and surface flooding.

The downpour is forecast to reach the ranges of eastern Bay of Plenty this afternoon and evening.

Severe winds of up to 130 km/h are predicted to hit Taranaki, Marlborough and Wellington today too.

MetService said winds of this strength have the potential to damage trees, powerlines and insecure structures, as well as make driving conditions hazardous.

Winds brought down the CityMed sign in Albert Street in downtown Auckland, prompting a fire call out.

A glass window was also blown out in at a hotel in Hobson St.