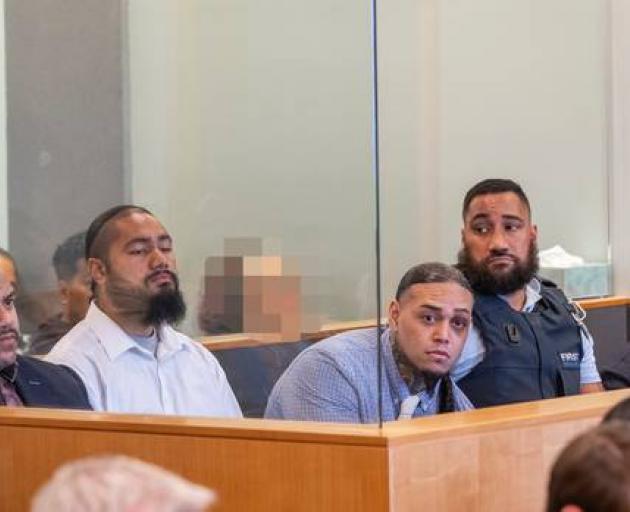 The sports star has been linked by the Crown to the drug syndicate of Tevita Fangupo (left), Toni Finau and Tevita Kulu, and Halane Ikiua (far right). Photo: NZ Herald
A top Kiwi sports star has continued his legal fight for permanent secrecy after allegations of his involvement in a global drug conspiracy case emerged.

The sportsman was named by prosecutors during the drug-trafficking trial last year and was accused of being linked to the offending after several messages were uncovered.

In a decision after the trial of Tevita Fangupo, Tevita Kulu and Toni Finau, the judge presiding over the case, Justice Mathew Downs, declined the sports star's bid for permanent name suppression. A series of appeal hearings were then heard last year with the Court of Appeal also declining suppression.

But, as the battle was set for a Supreme Court showdown, the case returned to the High Court today after new information emerged and the sportsman made a fresh suppression application.

However, the details of the new information, or the legal arguments made and the evidence from today's hearing were prohibited from being published by the Herald and other media by Justice Downs.

After the two-hour hearing in Auckland, the judge reserved his decision and will deliver it in writing at a later date.

Representing the sports star, former solicitor-general Michael Heron, QC, earlier argued at the Court of Appeal that if his client is named it would cause almost irreparable damage to his career.

Heron also said at the Court of Appeal last July that the sports star "strongly denies the allegations".

But in its decision last August, the Court of Appeal said there is "unquestionably, a high public interest" in how methamphetamine comes into New Zealand, including how it is financed, transported and distributed once it arrives.

"The public has an interest in knowing who is behind this offending, including those who assist or enable it to occur, even if not directly involved," the judges said.

Despite not being charged, the Crown accused the sports star of being allegedly involved with the syndicate, which was importing drugs from North America.

A search warrant had been obtained by police for the sportsman but it was never executed.

Sources have told the New Zealand Herald that police did not consider they had enough evidence to secure a conviction against the star.

In its decision, the Court of Appeal also mentioned the importance of knowing why police decide to, or not to, charge a person.

"There is a legitimate public interest in knowing of allegations of serious conduct against a person who enjoys a high public profile and of the fact that the police have not considered that charges are warranted," the decision reads.

"The police statement that omits any names is insufficient to allow such debate."

After the trial, Detective Inspector Scott Beard, who was at today's hearing, said the sports star did not receive "special treatment" but added "there was insufficient evidence to charge" him.

The Court of Appeal has also warned that care is needed to avoid a "trial by media" for the sportsman.

"The allegations against [the sportsman] are no more than that; they have not been proven and there is currently no forum for that to happen."

During the trial, a witness also said he saw the sportsman purchase "white pills" in 2017, which was argued by Finau's defence to be a reasonable possibility of being steroids or another body building substance rather than meth.

The members of the syndicate - Fangupo, Kulu, Finau and Halane Ikiua - were all sentenced to terms of imprisonment last November for importation and supply of methamphetamine and cocaine, and conspiracy to supply drugs.

A fifth man, Shane Singh, has also already been jailed for importing a Class A drug.