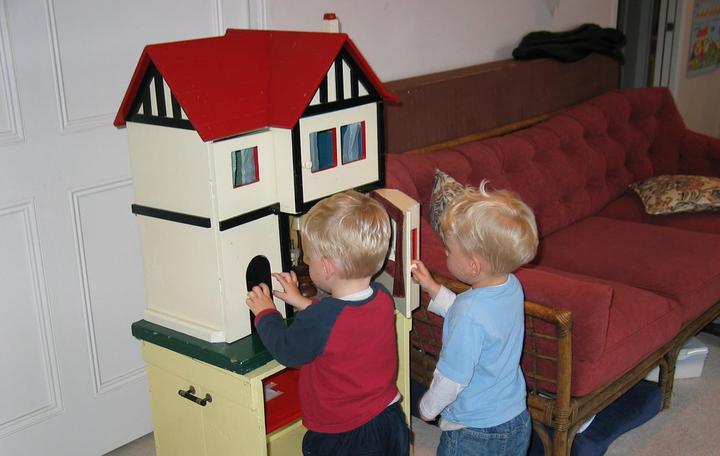 An RAF trainee pilot enlisted the help of other trainees to make the doll's house in secret. He wanted his baby daughter to have something to remember him by should he not return from the war Photo: SUPPLIED
A doll's house built in secret by World War 2 pilots has been returned after it was mistakenly given away.

RNZ reported yesterday how Rachel Rogan's husband gave away the family heirloom last weekend while clearing out their house in Belmont on Auckland's North Shore.

The house was made by his grandfather while he was training as an RAF pilot in the South Island. He enlisted the help of other trainees, and they worked on it in secret, stealing bits of wood from the workshop and using them to create the house and tiny pieces of furniture for it.

Patricia's Doll's House - named after the daughter he feared he might not see after going to war - was handed down through the family and eventually ended up with the Rogans.

Rachel Rogan said her daughter burst into tears when she discovered her dad had given it away, as she had hoped to one day pass it down to her daughter. It was a genuine mistake, and the family really wanted it back, she said.

After RNZ published the story a couple contacted Rachel saying they had the doll's house.

"[The man] said that friends of his wife's gave it to them a few days ago...and he said he was looking at the paint and thinking 'that must be pretty old...and it'll be a mission to sand it back'," Rachel said.

"And he said that he was reading the news... and thought 'I wonder if this is the same one as in the story.' That's when Mel got in touch with me on Messenger and sent a pic."

It was confirmed the couple - who have two children and live in Torbay - did indeed have the doll's house. They insisted on dropping it off on Saturday night.

Rachel said everyone wore their masks while the exchange happened - but she was grinning a lot under hers.

"I feel very humble; very grateful and very amazed at how much kind-heartedness has come out of the woodwork, so to speak," she said.

"It's going to be a bugger of a thing to sand back, but if I start now I might have it ready for generations four and five."