Collins not sorry to see back of Bennett

Senior National MP Judith Collins says she's not sorry to see the back of Paula Bennett and has revealed why she voted to roll her in the leadership coup.

And National leader Todd Muller says he's not bothered by Bennett appearing in a video with a comedian in her likeness saying "eff you, Nats" because there are worse videos of him on TikTok.

Before the National caucus meeting this morning, Collins said she'd backed Muller in the spill that ousted Simon Bridges and Bennett, his then-deputy.

And she said she wasn't sorry to see Bennett quit.

"I've seen lots of people come and go and I think for Paula it's the right choice for her and I think she clearly has not been feeling that focused for the last few weeks.

"I think I'm pleased for Paula that she's going out on her own terms and that's what I'd like to see." 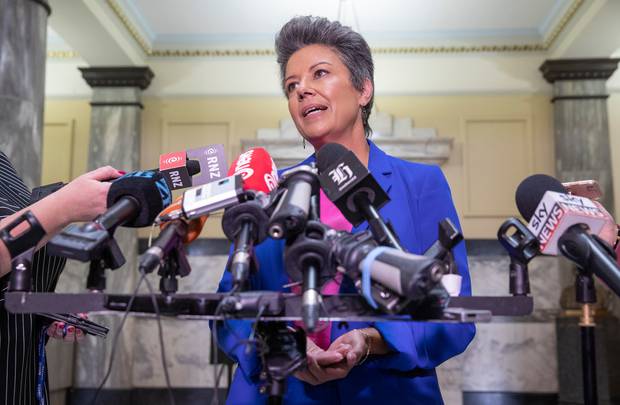 National Party deputy leader Paula Bennett said yesterday politics had been a wild ride but it was time to have another career. Photo: Mark Mitchell

Bennett made a shock exit from politics yesterday after announcing she'd stand down at the election in September to pursue business opportunities.

Part of the surprise was she'd told comedian Tom Sainsbury - who'd mimicked her for years - about her decision at the weekend so they could do a video together before her boss.

Over the years, the latte-bowl loving and Collins-loathing caricature of Bennett has become one of Sainsbury's most popular characters.

In yesterday's segment, he pretends to be the MP announcing her retirement and stops himself repeatedly from criticising the National Party or the new leadership team.

"Obviously I'm going to see out the rest of the term, and then it's sayonara Nikki [Kaye], sayonara Todd [Muller]."

"Maybe I'll be an entrepreneur, open a big kimono business."

Muller said today he'd seen the video - which ends with Bennett and Sainsbury dancing in colourful kimonos to Gloria Gaynor's I Will Survive - and said it appeared to be "an enjoyable half hour or so between them".

He wasn't "put out" by the fact Bennett told Sainsbury before him and was asked about Bennett appearing in the video in which Sainsbury in her likeness saying "eff you, to the Nats".

"According to my daughter there are all sorts of TikTok videos around of me that are even worse so I'll just have to run with it." 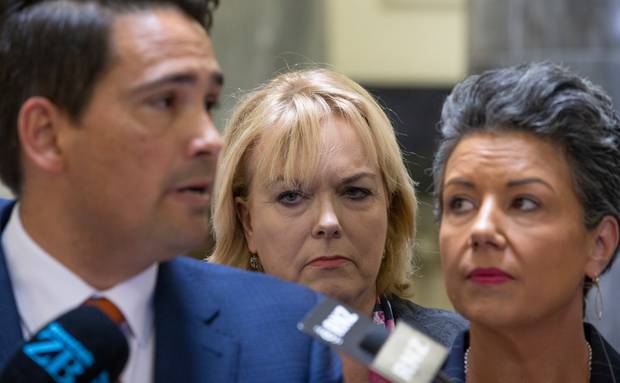 Judith Collins has revealed why she voted to oust Simon Bridges and Paula Bennett from leading the National Party. Photo / Mark Mitchell

Why Collins voted out Bridges

Collins said she voted for Muller because she thought it was "the best course" for the party.

She believed he was best placed to make sure her colleagues on National's list kept their jobs after the election.

"I have been very successful in voting for the right leader every time," said Collins.

"They didn't have to promise me a lot.

Asked by media whether he thought Collins took any votes with her to Muller's camp, Bridges replied: "Not many, if any."

Collins also said this morning she thought Sir John Key ran a "boys' club" during his time in power and that she'd been kind to former Prime Minister Bill English after calling him a bad leader.

Collins is on a publicity trail in the lead up to the release of her book, Pull No Punches, and in interviews over the weekend called Key "brutal" and spoke about his all-male inner circle dubbed his "kitchen cabinet".

"To say it's anything other than a boys' club? No I'd say it's pretty much a boys club and some women are better in boys' clubs and I'm not," Collins said today.

She also aired her grievances with English by saying he wasn't a good leader and was better as a deputy.

Collins said she hadn't spoken to Key or English since bad-mouthing them in public but said they should both be pleased with her book.