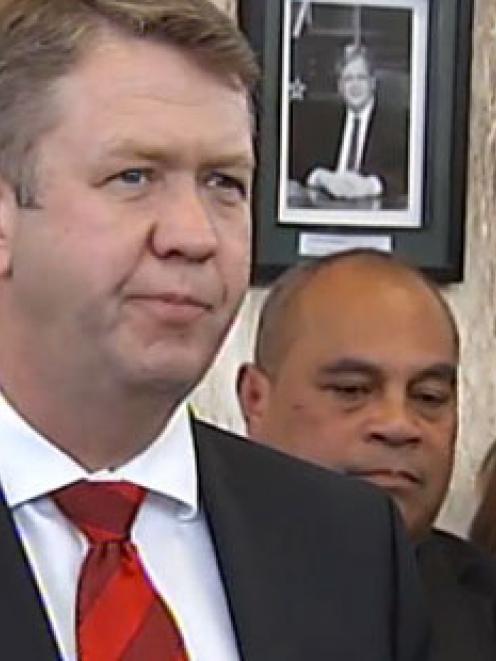 David Cunliffe, making his announcement today. Photo By NZ Herald
David Cunliffe has announced he is withdrawing from the Labour Party leadership contest.

Speaking at his electorate office in West Auckland this afternoon, Mr Cunliffe said it had been a hard decision but within the wider interests of the party, and he was backing Andrew Little for the leadership.

"I believe that although I retained support broadly around the party, the time has come to step aside."

Flanked by two Labour MPs, William Sio and Nanaia Mahuta, Mr Cunliffe said he made the decision last week after Mr Little put his hat in the ring.

Mr Cunliffe said he would remain as an MP in Parliament for his seat of New Lynn.

But Mr Little would achieve "greater cohesion" within the party, he said.

"It has been an absolute privilege to lead the New Zealand Labour Party."

He said his family was "staunchly behind" his decision and he'd now be putting his full support behind Mr Little.

"I think it's the right thing for the party and for himself, actually."

He said it had become clear Mr Cunliffe was unlikely to be able to make the changes the party needed to lift its support among the wider population.

Asked about Mr Cunliffe's endorsement of him, Mr Little said he appreciated any support he could get but it would still be a challenge to secure the leadership.

He repeated he was not offering positions to MPs before the leadership vote was held and had not offered Mr Cunliffe anything.

Despite that, Mr Cunliffe's endorsement could help Mr Little among the party's broader membership, especially in Mr Cunliffe's Auckland stronghold.

"I appreciate any support I can get. It's always welcome but I've still got my work cut out for me to convince those who are wondering if I've got enough experience in Parliament, and other qualities you need for the leadership. So nice as it is to have support, I don't underestimate the task ahead of me."

Mr Cunliffe secured a large proportion of the union vote last time, but much of that was expected to swing to Mr Little instead.

Acting leader David Parker ruled out having Mr Cunliffe as his deputy but would not rule out a front bench position. "That's a decision for then, not now."

Mr Cunliffe told him of his decision this morning. "He's made the right decision for him and the party, and he should be treated with the respect all former leaders deserve."

Asked about Mr Cunliffe's endorsement of Mr Little, Mr Parker said MPs could endorse whoever they liked. He did not believe it was a punishment for Mr Parker's statement he had lost confidence in Mr Cunliffe following the election. "But I can't answer for him and I won't."

He said it was Mr Cunliffe's right to decide to stay on in Parliament. "He's been elected and that's his right."

He was confident Mr Cunliffe would be able to settle into caucus again.

Mr Cunliffe's road to election night was marred by a series of gaffes.

The Labour leader caused outrage when he said he told a Women's Refuge Forum he was "Sorry for being a man", because men are usually responsible for violence against women and children.

While the crowd approved, the public were less forgiving and Labour's funding promise for victims' support groups was lost in the furore.

Mr Cunliffe then struggled to give clear answers on the effect of his party's flagship Capital Gains Tax on the family home, scaring mums and dads into believing a Labour-headed government could get a slice of what they saw as their children's birthright.

Following Labour's disastrous result on election night, Mr Cunliffe announced he would formally resign as leader but would enter the contest to win his job back - a decision that led to Labour's leadership primary run-off.

But support for his bid was thin.

EPMU, Labour's largest affiliated union, sent Mr Cunliffe a warning not to assume it would back him again if he forced another leadership run-off.

Meanwhile, wife Karen Price was unmasked for creating a fake Twitter account, set up to attack her husband's opposition.

Ms Price, an environmental lawyer, said she set up the Twitter handle @TarnBabe67 out of "extreme frustration" after the election and had used it to make comments that she now deeply regretted.