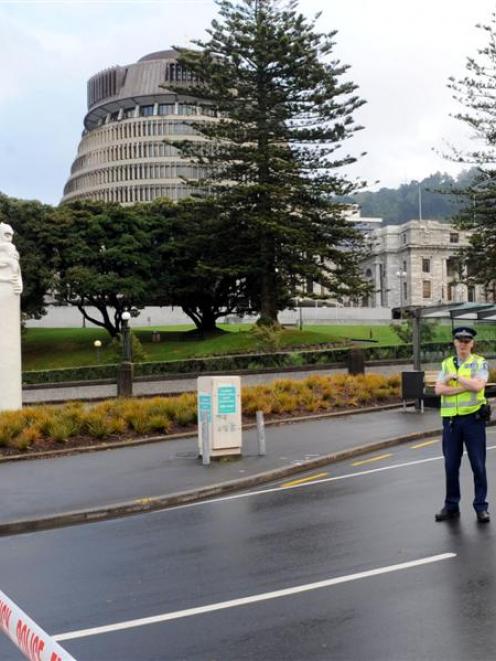 Moleworth Street is closed off after staff at Parliament were evacuated in a bomb scare. Credit:NZPA / Ross Setford
Prime Minister John Key hunkered down in a bar this morning after a bomb scare meant he couldn't go to his office.

Mr Key and Cabinet Minister Steven Joyce and their staff this morning sheltered from the rain during the bomb scare at local watering hole The Occidental.

The pub is a parliamentary institution and the ministers and about 15 staff used the opportunity to grab a bite to eat.

"It's not the normal start to a Monday morning unfortunately," Mr Key told NZPA.

Business continued as Mr Key got emails on his phone and discussed issues with Mr Joyce.

However, it was too far to say Cabinet had reconvened in the pub.

"It won't be Cabinet but it's the first time I've had breakfast here, delicious."

Beehive staff have now returned to their offices after the scare.

The whole executive wing was evacuated when the package was found about 8am by an arriving worker in Agriculture Minister David Carter's office on the fifth floor of the Beehive.

The building was evacuated and police set up a cordon, closing down Molesworth St and adjacent streets.

Police donned special equipment before heading up to the fifth floor, but staff were told just after 10.30am they could return to the building.

Mr Key said the necessary safety precautions were taken and Cabinet this morning has been rescheduled to take place at Premier House.