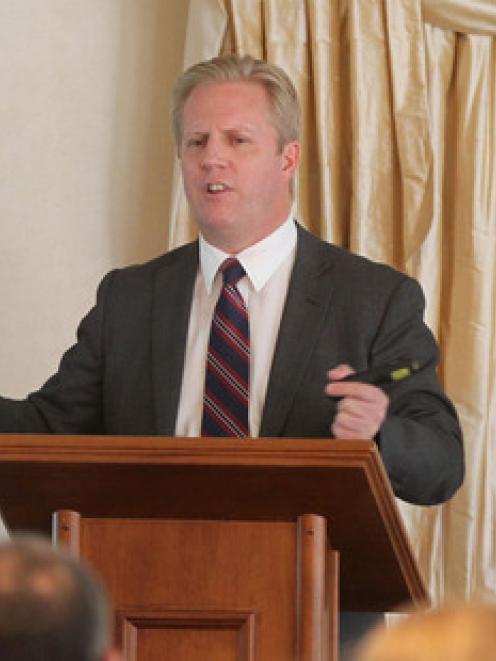 He was commenting about news reports that China could take retaliatory action against dairy and kiwifruit exports from New Zealand if a formal investigation into alleged steel dumping by China is launched by the Ministry of Business, Innovation and Employment (MBIE).

McClay said he would be asking his officials to contact China's embassy.

"Certainly I would be asking officials to clarify the Chinese position in as far as any competition issue was concerned," he said today from Townsville, en route to Indonesia with a trade delegation, where he is meeting up with Prime Minister John Key.

"Market economies don't do that with each other. WTO [World Trade Organisation] rules don't allow it," McClay said.

"I will certainly be talking with my colleagues and the Prime Minister when we get to Indonesia."

Fairfax today reported that Chinese officials had "heavied" Fonterra and Zespri to exert influence to prevent any formal MBIE investigation from occurring.

Under WTO rules, officials must make confidential inquiries without reference to politicians to see if there are grounds to hold an investigation into dumping, at which point an investigation is publicly announced.

To meet the test of "dumping", Chinese steel in New Zealand would need to have been sold at a lower price than it normally sells for in China and it must have caused or threaten to cause material injury to the New Zealand industry.

McClay said he could make no comment on any complaint or inquiry unless it became an investigation.

"But I would have expected that any country in the world that was considering what has been suggested in that article would raise it with the Trade Minister when Trade Ministers met."

He had a formal bilateral meeting with his Chinese counterpart, Gao Hucheng, in Beijing last week.

"Absolutely no competition trade issue was raised with me last week when I was in China."

Fonterra spokesman Phil Turner and Zespri chief operating officer Simon Limmer told Fairfax they had no knowledge of what was alleged.

Meanwhile, the president of Federated Farmers, William Rolleston, said he would "pretty surprised and disappointed" about heavying to prevent an investigation if it were true.

He said China should not be offended by a possible investigation into alleged steel dumping in New Zealand, and as a member of the WTO it should abide by the rules.

Any dispute over steel dumping should be "quarantined".

"Our relationships with other countries go much deeper than one single traded item."

Any retaliatory action would be outside the rules of the WTO and could itself be the subject of a complaint to the WTO.

"If we did take any action in terms of going to the WTO, China should not be offended. It should just look at what the rules are that it signed up to and work our way through the issue that rather than taking independent action."

The whole point of being a member of the WTO was to play by fair rules.

"It is not the way the Chinese normally behave and I am dubious that in fact this behaviour is occurring," he said today.

"My view is that if they were to impose pressure, they would have raised it with Todd McClay last Sunday when they met with him and he says that they didn't. So it doesn't make sense to me."

He had heard that one New Zealand exporter had heard from a Chinese trade association that there could be an issue.

But he questioned why China would get Chinese importers to stop buying New Zealand products.

It would be simpler to register its dissatisfaction through New Zealand's efforts to upgrade its free trade agreement with China.

McClay told the Herald today that Gao, his Chinese counterpart, had invited him back to Beijing in two months time to start talks on the FTA upgrade.