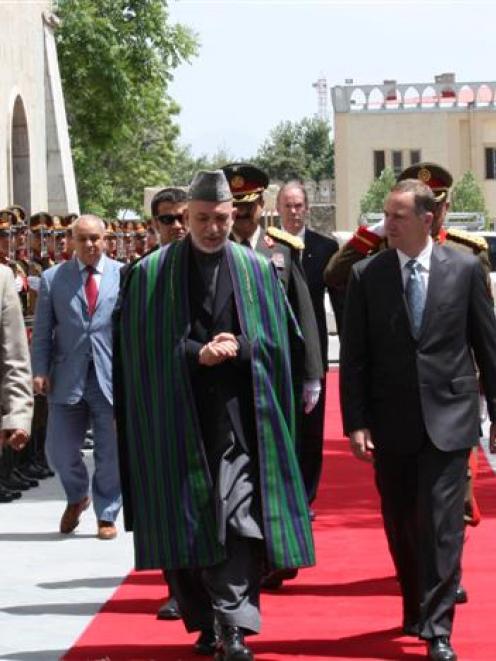 On arrival in Kabul, the Prime Minister was flown by helicopter for a meeting with New Zealand Special Air Services troops and on Sunday went to Bamiyan to meet troops in the Provincial Reconstruction Team (PRT).

Mr Key said he had to visit.

Speaking outside the British embassy in Kabul, where he stayed while in the capital, Mr Key said the intense security made him feel safe but "in the end, everybody's at risk".

Mr Key said another motivation was to come and make his own assessment of the work of the 70-plus SAS team, which is due to leave in March, and the 140 troops in Bamiyan, whose rotation ends in September.

He is considering extending both. The trip was planned months ago but was kept secret for security reasons.

Mr Key said progress was being made in the war.

"I think it's too early to say we are winning. I think there's been a definite change of emphasis under General McChrystal.

"If you go back three, four, five years ago it really was a war that was recorded by the body bags and the count of the number of Taliban that were being killed. And that was seen as the milestones of success.

"That's completely changed and now it's very much about the hearts and minds of people being won and whether Afghans themselves want to stand up and say, `Look, we want to run our country and we don't want the Taliban running things'."

Mr Key said the world could not ignore the threat of Al Qaeda and letting Afghanistan fail would give it back a base to plan international terrorist acts and reinstall a Taliban regime.

The importance of New Zealand's involvement was "huge" and important to global solidarity, he said.

"Individually, no one country can stabilise Afghanistan but I think 46 on a combined basis can."

Two former military chiefs with diplomatic experience were yesterday named as New Zealand's first resident ambassador in Kabul and the first civilian director of the PRT in Afghanistan's Bamiyan province.

Foreign Minister Murray McCully said Neville Reilly, a retired brigadier and the first PRT commander in Bamiyan, would be ambassador in Kabul and Dick Newlands, a retired air commodore, would be civilian director of the PRT.

The appointments were key elements in rebalancing New Zealand's commitments in Afghanistan in favour of greater civilian representation, in line with the international community's change in emphasis, he said.

"Until now, New Zealand has maintained its diplomatic relationship with Kabul from Teheran, while the PRT in Bamiyan has been under Defence Force command since New Zealand took over as lead nation in the region in 2003," Mr McCully said.