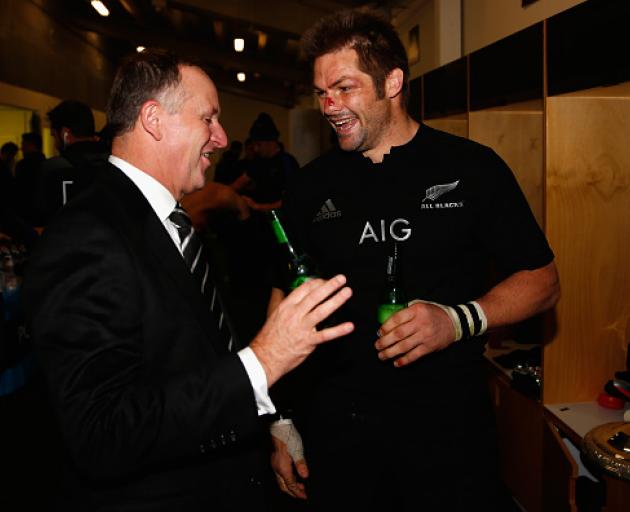 Yo Rich m8, its JK ;-) chk out my cool flg vid on the FB. Go ABs! Yes, the Prime Minister really did text the All Blacks captain Richie McCaw to ask him to check out his hugely popular flag video on his Facebook page.

The fact there was a text exchange over the flag was revealed through an Official Information Act (OIA) request made by a citizen, Hannah Coleman.

Ms Coleman was concerned the campaign to change the flag produced a shortlist of four options, of which three featured the Prime Minister's preferred silver fern.

New Zealanders get to vote on the preferred alternative between November 20 and December 11.

• Flag contenders to fly in Dunedin

Mr Key texted McCaw - probably the most famous living bearer of the emblem - sometime between the August 13 release of a video in which the Prime Minister set out his reasons for supporting change.

The Prime Minister's chief of staff, Wayne Eagleson, said there were a number of text messages between Mr Key and McCaw and it was unclear whether they would be classed as "official information".

"Most were of a general nature (and not necessarily as Prime Minister) such as text messages from the Prime Minister stating 'good game'."

But he said one specific text was directly relevant to the flag debate.

McCaw responded "he would have a look", Mr Eagleson said.

Towards the end of August, McCaw backed Mr Key's call for a silver fern flag.

The video was immensely popular on Facebook - it had 1,026,927 views by this afternoon. In it, Mr Key said the change would be important and benefit New Zealanders. He said "sheer confusion" was a good reason to change the flag, as it was often mistaken for the Australian flag.

A strong reason for changing the flag was to recognise the deaths abroad by servicemen and women with silver ferns marked on their headstones.

"They really fought for the values and principles that underpinned this country - for democracy, for freedom, basically for human rights, for women's rights. These are the things our people fought for, sought to defend."

The most important reason for change was to "build over signs of patriotism" and to "celebrate this young country".

Mr Key backed the silver fern and a flag people were happy to wear on their clothing, he said.

The response to Ms Coleman's OIA request also revealed the designer of two of the four-strong shortlist flags had lobbied Mr Key in recent years. It revealed Kyle Lockwood sent Mr Key versions of the flag which appeared in the shortlist, and fern lapel pins.

The OIA response also showed opposition from three regional branches of the Returned Services Association (RSA), and from the national body.

Ms Coleman said she believed the approach to the flag change project was wrong and she wanted to know more about it.

"I felt the whole flag consideration process was flawed from the beginning. I couldn't believe it when three of the final four flags announced included a fern and two were by the same designer."

She sent OIA requests after coming to feel the process was "a bit stage-managed and superficial".

The extension of time needed to deal with her request appeared to validate recent concerns the OIA process was being used to delay public access to information, she said.

Text messages were confirmed as "official information" following an inquiry by the Chief Archivist after Mr Key said he regularly emptied his phone for space and security reasons.

The Chief Archivist found some deleted messages should have been kept and briefed Mr Key's office on what should be kept.