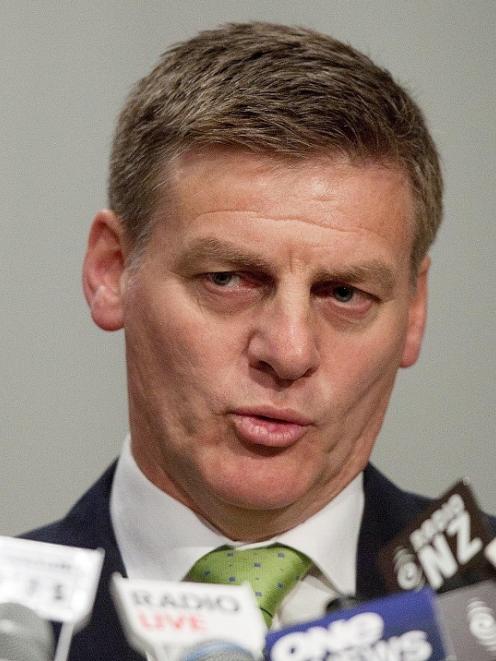 Bill English
Business leaders have been told in no uncertain terms that the Prime Minister will not break his word by raising the superannuation age.

Speaking at the Mood of the Boardroom breakfast in Auckland today, Finance Minister Bill English responded to calls from CEOs for National to reconsider its position on super.

Eighty-eight percent of more than 100 CEOs in an exclusive Herald survey said retirement funding should be raised to 67 from 65.

English said John Key's stance did not need to be explained again - "a politician made an undertaking that he's not going to break".

Key has repeatedly refused to raise the age, saying he would resign instead, and again ruled it out on TVNZ's Q&A programme on Sunday.

Speaking at the National Party annual conference in Auckland last week, he said: "I think that the bond of trust that's built up between a prime minister or politicians in the electorate is very important.

"And I've campaigned on significant issues, and if I go about and change those, then I break my word."

English told business leaders today National decided while in opposition that it wanted to make sure the superannuation issue was not going to become an ongoing one.

"So it (National) made a set of very clear undertakings about the system as it was at the time, and said 'we're not going to change it'," he said.

"One of the benefits of that has been that we've been able to focus for the first time in a generation on actually growing the economy instead of working out how to retire."

"David Shearer's already offered cross-party accord for this on many occasions," he said.

By the end of 2016 the amount spent on super will exceed the total amount of government spending on pre-school, primary intermediate, secondary and tertiary education, Parker said.

He last week said the government had no credible way of paying the super bill.

"Fair changes now mean no need for unfair changes later, such as cutting the rate of Super or making working Kiwis pay through the nose.

"Labour's policy of steadily raising the superannuation age to 67 is prudent financial management and the fairest way of dealing with the pressures caused by the looming fact of a million people aged over 65."

CEOs signalled in the Mood of the Boardroom Survey that the Key Government needed to tackle the eligibility age.

"The only real negative is the failure to address the superannuation debate when the public clearly gets it that something needs to change to maintain affordability," said a CEO speaking under anonymity.

Navman chief executive Andrew Blakey said the post-election period "has been disappointing from Key". He also said there had been numerous examples of poor political management pointing to "the complete head-in-the-sand approach to superannuation".

Fifty per cent of CEOs also wanted the age-raising transition phase completed by 2017.