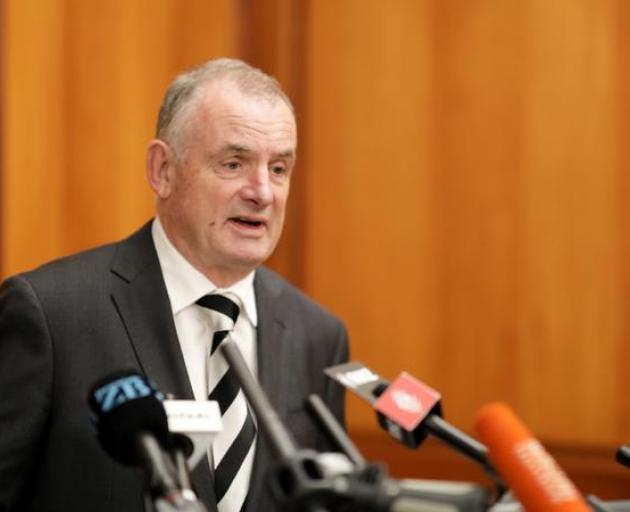 The teens were kicked out by Speaker Trevor Mallard, who banned them from Parliament for a year. Photo: RNZ
A group of about a dozen teenagers, including three Green Party Youth MPs, were kicked out of Parliament and banned from the premises for a year after protesting in the public gallery.

And MPs have come to their defence, with a senor National MP saying the one-year ban was "excessive".

"It will be no surprise that we are Green Youth MPs," Jan Logie's Youth MP, Lilly, told media after they were escorted out of Parliament by security this afternoon.

She was joined by Golriz Ghahraman and Chlöe Swarbrick's Youth MPs – Ari and Luke.

They said that Ghahraman, Swarbrick and Logie did not endorse their activities this afternoon.

They were kicked out by Speaker Trevor Mallard, who banned them from Parliament for a year.

Speaking to media outside of Parliament one of the group's spokespersons, Jack Leang, said it was peacefully action to draw MPs' attention to the Ihumātao hikoi making its way to Prime Minister Jacinda Ardern's Mt Albert office this afternoon.

She said the hikoi was going to Ardern's doorstep in Auckland – "and we thought we would take it to her other doorstep".

Ardern was not in the House or at her Mt Albert constituency office today.

After the group began singing, Mallard warned them to stop singing.

When they refused, Mallard said: "All individuals in the gallery will face a one-year ban from the building."

The group of Green Youth MPs said being kicked out and banned from Parliament for a year was "worth it".

But National MP Nikki Kaye said in the House that Mallard may have been too harsh on the group.

Speaking in the House during a debate, she said she accepted that there cannot be disorder in the House.

"But a year ban from Parliament for having their voice heard, I think is excessive and I want to put that on the record."

Swarbrick told The Herald the protests in the House was the "boiling over of frustration on issues of indigenous sovereignty, climate action, inequality and the raft of other issues younger generations carry the disproportionate burden of".

She agreed with Kaye that the year ban was excessive.

Mallard would not comment further, beyond what he said in the House.
Meanwhile, veteran MP Nick Smith was kicked out of the House again today.

Mallard told him to leave the chamber after arguing with the Speaker.

Speaking to media, Smith said there was "no question that [Mallard] was picking on me" and went as far as calling him "biased".

"I do find him a biased speaker, I find him unfair in that he continuously targets me."

Under Parliament's rules, calling the Speaker's impartially into question is a serious offence and can result in him being named – which means he would be banned from the House for a week and docked a week's pay.

Smith has already been named once this year and has been thrown out of the House multiple times.

Asked if he was in danger of becoming the Parliament's bad boy, he said he had no intention of adopting that title.