Todd Muller. Photo: NZ Herald
Todd Muller has confirmed he will challenge for the National Party leadership on Friday and has told colleagues they can't win September's election under Simon Bridges.

The two-term MP informed Bridges and National Party president Peter Goodfellow of his challenge this afternoon.

Muller sent a letter to all National MPs, advising them of his decision to contest the leadership. An emergency caucus meeting will be held at midday on Friday

"It is essential that National wins this election," Muller wrote this afternoon.

"I share the view of the majority of my colleagues that this is not possible under the current leadership."

Muller said the country faced the most enormous challenge since the end of World War 2.

"Labour has failed to deliver on every measure it has set for itself in Government. This will not change and the consequences of it being re-elected at this time will be catastrophic for two generations," he wrote.

"Our communities and our economy are at stake. It is essential National wins this election."

Read the full text of Muller's email to National caucus below

Muller and Nikki Kaye had already been publicly outed as the coup conspirators.

National MPs will hold an emergency caucus meeting at midday on Friday as Bridges seeks to stare down an attempt to roll him.

Bridges said this morning that he was being challenged for the leadership after the Herald reported yesterday that a no-confidence vote would be mounted against him at the party's next regular caucus meeting on Tuesday.

The caucus will now meet on Friday as Bridges seeks to front-foot a challenge.

Calling the caucus meeting for Friday, rather than the usual weekly Tuesday meeting, means Bridges reduces the time his challengers have to lobby MPs for change.

She said her focus was on running the Government and, given her experience in opposition, it was her policy to not comment on a rival party.

"I'm focused on jobs and employment," she told reporters this afternoon.

National MP Sarah Dowie, who will not be standing for re-election at September's election, said she supported Bridges and the leadership challenge was a distraction for the party.

"This is typically not the way we behave."

Dowie said Bridges did the right thing by throwing down the gauntlet to any MPs looking to challenge him for the leadership to come forward.

"If they have an issue with leadership, they need to be upfront, or speak up in caucus."

Brett Hudson was also in support of Bridges, who he said was the "right leader for National at this time".

National should be focused on New Zealand, and New Zealanders at this time, he said.

"I can't think there would be a single New Zealander that thinks we should be focused on ourselves rather than them."

Hamilton West MP Tim Macindoe said he would not throw his support behind anyone until he knows there will for sure be a challenge.

"You wouldn't bet on a house without knowing the other horses in the field," he said.

If there was a challenge, Macindoe would be voting for someone who was going to present the "best option for a strong National campaign".

National MP for Helensville Chris Penk said he'd back the party's current leadership team "in pretty clear terms" and didn't think the time was right for a leadership challenge.

"There's a few names swirling around but for me it's that we've got to be talking about the things that matter. A lot of New Zealanders are hurting right now."

Judith Collins has ruled out challenging Bridges, and said she has no intention of contesting the leadership. Mark Mitchell has also said he is backing Bridges and will not challenge him.

However, Mitchell could contest it if the position was open.

Earlier this afternoon, I notified Simon and our Party President Peter Goodfellow that I would be seeking a ballot for the leadership of the New Zealand National Party as soon as is convenient for the caucus.

This country faces the most enormous challenge since the end of the Second World War. Labour has failed to deliver on every measure it has set for itself in Government. This will not change and the consequences of it being re-elected at this time will be catastrophic for two generations.

Our communities and our economy are at stake. It is essential National wins this election.

I share the view of a majority of colleagues that this is not possible under the current leadership.

I believe I am best placed to earn the trust of New Zealanders by September 19.

I will be talking to each one of you about how we can all pull together and be deserving of New Zealanders' trust.

I love this party and what we can do for our country. 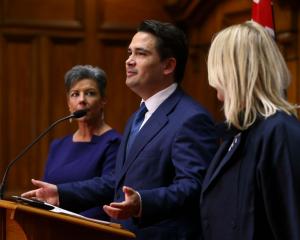