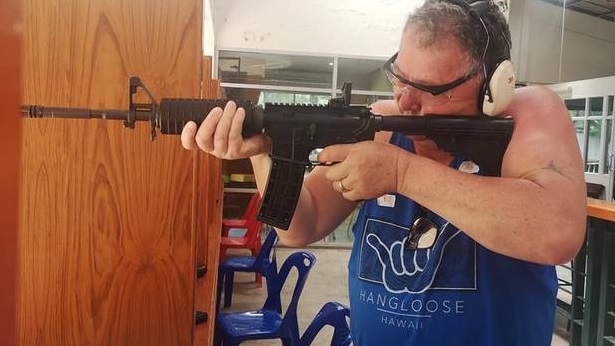 Shane Jones in action at the shooting range. Photo: Facebook via NZ Herald
Maverick politician Shane Jones says his overseas use of a high-powered gun banned in New Zealand was "international research".

A series of photos posted on social media by Jones' wife, Dot Jones, while on holiday in Thailand show the Forestry Minister and self-proclaimed Champion of the Regions at a firing range with a semi-automatic rifle last week.

An expert says the firearm appears to be an AR-15 - one of the weapons used by the accused Christchurch mosque gunman and now banned by the Government this year.

Jones didn't seem to do too badly either, posing with a target showing a score of 89 out of 100 – dated last Friday.

He told the New Zealand Herald that while he had grown up with guns on a farm he was not an expert on military-style weapons and "more of a shotgun guy".

He said he had popped into the range for about an hour on a rainy day, and that the site was an advertised tourist attraction.

"But the decisions that our Cabinet have made as to what types of arsenal are and are not legal is something I thoroughly agree with. We shouldn't be hosting them here," Jones said.

"I think I will regard my brief experience with said gun as part of international research … but I wouldn't catastrophise one photo."

A spokeswoman for the Council of Licensed Firearms Owners said it appeared Jones was pictured holding an AR-15 - although markings on the gun could not be identified in the photos.

"That would mean both the firearm and magazine would be prohibited and now banned in New Zealand."

The law did not prevent New Zealanders from using the weapons overseas, she said.

"Mr Jones looks to be on a range in a controlled and safe environment," she said.

"We are glad to see Mr Jones enjoying himself and educating himself on the types of firearms that people here may no longer use in a sporting environment like on a range."

The AR-15 rifle was used in the Christchurch mosque attacks and other mass shootings, and its manufacturer, Colt, announced it was suspending production last month, saying there were too many of the weapons on the market.

The Facebook post - which also included a number of non-gun-related holiday photos - has been removed since inquiries were made by the Herald.

Jones received a telling off from Prime Minister Jacinda Ardern before leaving for holiday about two weeks ago, after reportedly trying to solicit votes for NZ First at the Northland Forestry Awards.

Ardern said she had suggested to Jones that he study the Cabinet manual while on his holiday.

Jones said while on his trip - which also included a visit to Hong Kong - he had time to "think about the importance of constitutional proprieties".

"Parts of the Cabinet manual, in all seriousness, I did brief up on. The Prime Minister's point was a valuable one," he said.

"… to tighten up on presentations to industry organisations so they realise that I'm there as a Minister of the Crown and not as a retail New Zealand First politician."

Jones' New Zealand First party has previously proudly resisted changes to gun laws, but threw its support behind the Government's first tranche of reforms this year, saying the Christchurch mosque shootings had changed everything.

The second tranche of reforms, which tighten registration and impose bigger penalties for breaches, are now before a select committee.

Tipple said he expected the gun law reforms to be raised, but that was not the reason he bid for the dinner.

The auction, on Trade Me, was a fundraiser for Koru Care, a charity that gives sick and disabled children dream trips and adventures, often overseas.

Tipple this year urged lawmakers to slow down on gun reforms. After the Christchurch attacks, he revealed his Gun City chain had legally sold four weapons to the accused gunman