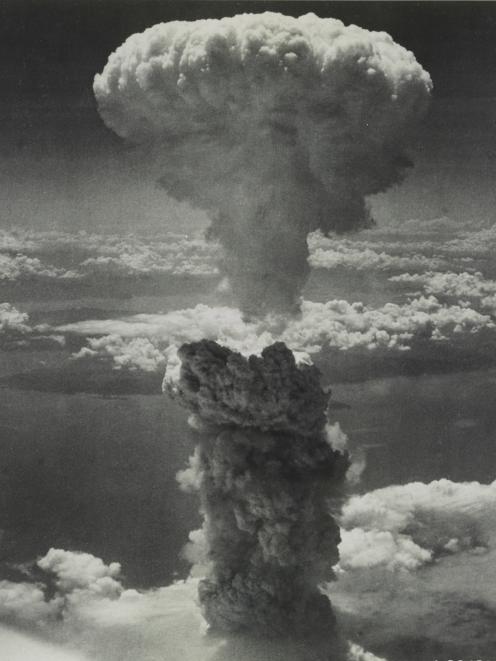 A giant mushroom cloud billows in the sky after the bomb was dropped on Hiroshima in 1945. Photo: Reuters
Today marks 75 years since the United States unleashed the world's first atomic bomb attack on the city of Hiroshima, followed three days later by the second and last on Nagasaki, vapourising lives, buildings and Japan's capacity for war.

At 8.15am on August 6 in 1945, the US B-29 warplane Enola Gay dropped a bomb nicknamed "Little Boy" and obliterated the southwestern city of Hiroshima, killing 140,000 of an estimated population of 350,000, with thousands more dying later of injuries and radiation-related illness.

75 years on, Japan bomb survivors are working to ensure their call for the abolition of nuclear weapons lives on after them.

There are an estimated 136,700 survivors of the Hiroshima and Nagasaki attacks still alivehttps://t.co/fu30Jz0SqR pic.twitter.com/Pm67x6QEs1

After the blast, rubble and contorted metal stretch almost uninterruptedly to the horizon. Electricity poles and bare trees accompany the dotted handful of windowless buildings which appear to have withstood the impossible.

Japan will commemorate the 75th anniversary of the bombing of the two cities today and Sunday.

In previous years, Prime Minister Shinzo Abe and the city mayors attended annual memorial services and renewed pledges for a nuclear-free world. Bells tolled and a minute's silence was observed at the exact time the bombs detonated in both cities.

Commemorations this year will be scaled back due to the Covid-19 pandemic, with fewer seats and video messages from dignitaries.

A view of damage wrought by the atomic bomb in the city of Hiroshima. Photo: Reuters
Reuters
Comment now