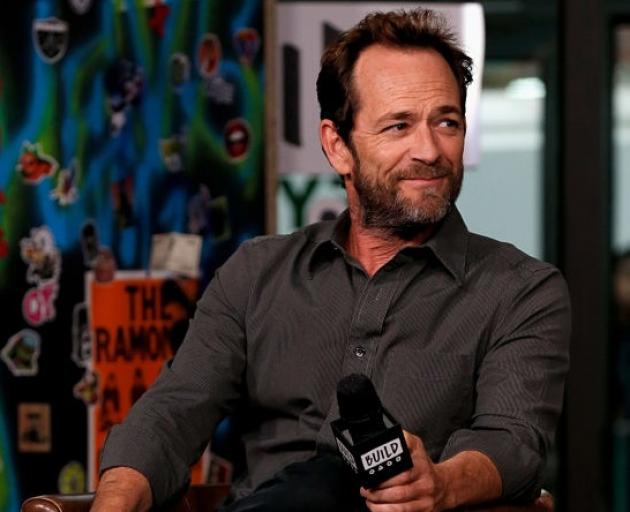 Perry shot to fame in the 1990s in 'Beverly Hills 90210' and is known for his recent work in 'Riverdale'. Photo: Getty Images
Luke Perry has died, days after suffering a major stroke.

"The family appreciates the outpouring of support and prayers that have been extended to Luke from around the world, and respectfully request privacy in this time of great mourning. No further details will be released at this time."

Perry, who rose to fame in the 1990s for his role on the hit television series Beverly Hills 90210 was hospitalised in California after suffering a "massive" stroke at his home in Sherman Oaks last week.

The 52-year-old actor was rushed to a Los Angeles-area hospital where his condition reportedly worsened and he remains under observation.

Prior to his stroke Perry was said to be experiencing "bad back problems", which had to be surgically fixed, according to the actor's neighbour.

Dearest Luke,I will forever bask in the loving memories we've shared over the last thirty years. May your journey forward be enriched by the  magnificent souls who have passed before you, just like you have done here, for those you leave behind.— Ian Ziering (@IanZiering) March 4, 2019

Perry's last major health scare was in 2015, when precancerous growths were found in his body following a colonoscopy, prompting the actor to speak out about checking for colorectal cancer.

His role as Dylan McKay on Beverly Hills 90210 made him one of TV's top heartthrobs of the 1990s.

My heart is broken. I will miss you so much Luke Perry.  Sending all my love to your family. ❤️ #LukePerry— Molly Ringwald (@MollyRingwald) March 4, 2019

Perry had been in Los Angeles working on the television series Riverdale, an adaptation of the Archie comic books in which he plays Archie's father Fred Andrews.

He played the onscreen father of Kiwi actor KJ Apa in Riverdale.

Perry was born in Mansfield, Ohio, on October 11, 1966, and grew up in nearby Fredericktown.