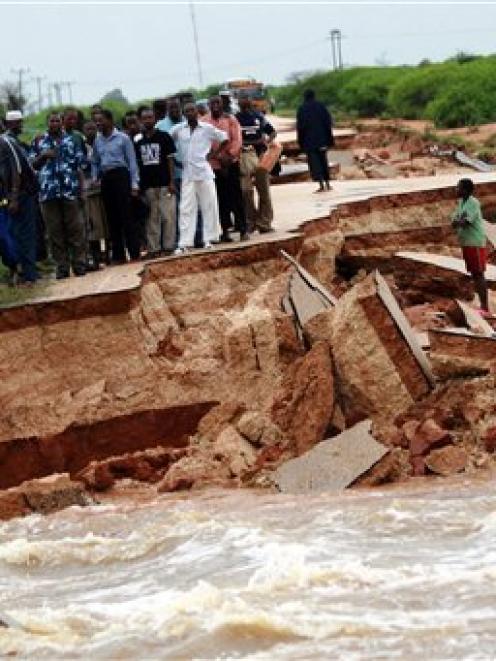 Stranded passengers headed to Mombasa town from Lamu Island look on after the Kanagoni bridge, 160 km (100 miles) north of Mombasa town was washed away by raging floods in Kenya's Coast province on October 28, 2009. Photo by AP.
A global network of aid agencies has called on governments to do more to reduce the impact natural disasters caused by climate change will have on poor countries.

The International Federation of Red Cross and Red Crescent Societies said governments can do this by tackling food shortages, supplying clean water and increasing awareness among citizens about how to cope with disasters.

World leaders will meet in Copenhagen next month for a key climate summit. US President Barack Obama and other leaders have said it is unrealistic to expect the summit to complete a full treaty to cut greenhouse gas emissions.

A major issue at next month's meeting is how much wealthy countries will give poor countries to cope with climate change.

Konoe said that the world is already late in dealing with people affected by climate change that has become a major driver of weather disasters affecting millions of people worldwide.

He said the number of people affected has risen to about 243 million in recent years, from 190 million a year in the 1990s.

"It is a real and present threat. We must not delay action," Konoe said.