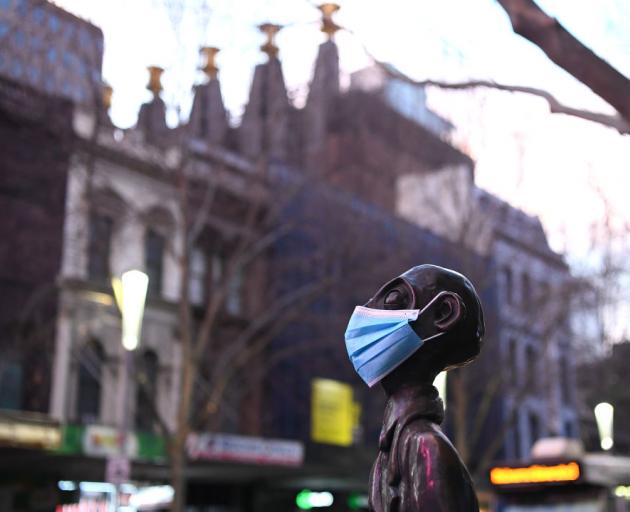 The nation has recorded its equal deadliest day of the pandemic on Tuesday, with 19 deaths in Victoria.

The state also had 331 new cases, slightly higher than the 322 on Monday, which was the lowest figure in almost two weeks.

It sparked hopes strict lockdown measures and mandatory face masks may be having an impact.

"We are seeing the first promising signs of a reduction in daily numbers of cases but it is too early to be certain," he told reporters in Canberra.

Professor Kidd said it was heartening to see declining cases in the past five days.

"While we still have hundreds of cases being reported each day, we will continue to have people admitted to hospital and people becoming gravely unwell," he said.

"Sadly, some of those people will die."

Even if Victoria gets on top of infection rates, there could be more heartbreak for families.

"There is a seven to 10-day lag between the daily reports in numbers of cases and people dying," Prof Kidd said.

"Some people are sadly dying very early in the course of Covid-19 but for many people, it is a week or more after they have been infected that we see people who are gravely unwell."

Prime Minister Scott Morrison lashed out at suggestions elderly people could be sacrificed to the virus after a rump of columnists continued to float the idea.

"That is just a hideous thought," he said.

"An absolutely amoral, hideous thought. One I have had no countenance with from the very first time it was suggested."

The federal government's Covid response will return to the spotlight on Tuesday when the nation's top public servant, Prime Minister and Cabinet secretary Philip Gaetjens, faces a Senate hearing.

National Covid-19 commission chairman Nev Power is also due to give evidence.

New South Wales recorded 14 new cases on Monday, with five linked to a growing cluster at a now-closed private school.

Queensland had one new infection, a man who returned from overseas in hotel quarantine.

The Sunshine State is waiting on coronavirus test results for two teenagers who were arrested after allegedly lying about being in a coronavirus hotspot in Sydney.