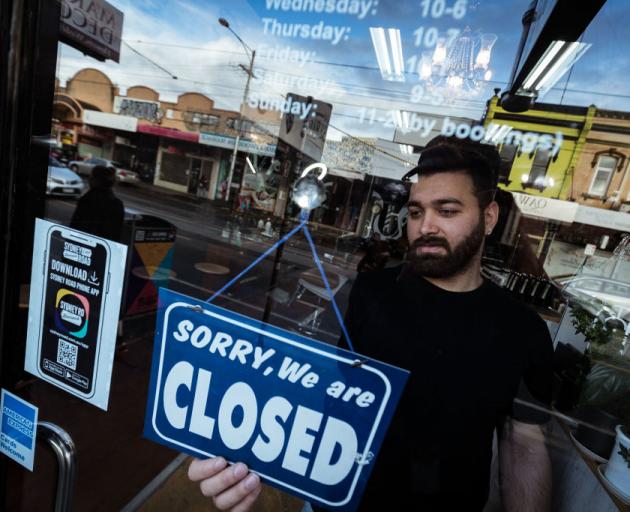 Mas Azemi has been forced to close his barber shop in the Melbourne suburb of Brunswick. Photo: Getty Images
Australians have been urged to check in with friends and family in Victoria as the state continues to record hundreds of new coronavirus cases.

From Thursday, essential workers in Melbourne will be required to show a permit if pulled over by police to prove they're allowed to leave their homes.

Victoria is in a declared state of disaster and stage four restrictions, including a curfew, have been imposed on the city of Melbourne.

Deputy Chief Medical Officer Michael Kidd has urged Victorians to look after their mental health and for other Australians to offer their support.

"A surprise phone call, an email, a video catch-up, even a card or a letter with positive messages of love or support can make a big difference to our family members and our friends in Victoria," he told reporters in Canberra.

There were 739 virus cases across Australia on Wednesday, including 723 in Victoria.

The state also recorded a grim record of 15 deaths, including a man in his 30s.

Prof Kidd says it could be several days before the tough restrictions result in less cases.

"I hope it won't be the case, but it may be, that the numbers will go even higher over the coming days before they start to come down as a result of the impact of the restrictions and the changes in behaviour among the population."

Queensland will close to people from New South Wales and the Australian Capital Territory from 1am on Saturday, despite Canberra having no active cases and not recording a new infection for almost a month.

NSW recorded 12 new cases on Tuesday with only one without a known source.

Travellers returning from Victoria to NSW will be required to go into hotel quarantine at their own expense as of Friday.

The federal government has announced a package for Victorian childcare, to ensure spots, jobs and centres are secure during the lockdown.

Prime Minister Scott Morrison is also offering other states and territories to join Victoria in receiving $A1500 ($NZ1600) payments for workers without sick leave.

Unions and Labor have been pushing for a national scheme, stressing the need to prevent outbreaks triggered by workplace transmission.