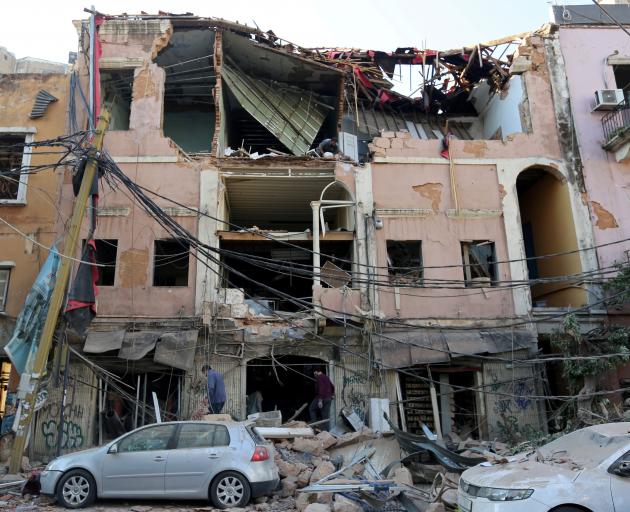 Men inspect a damaged building near the site of Tuesday's blast in Beirut's port area. Photo: Reuters
Walid Assi was cooking at a Beirut pizza joint on Tuesday night when a huge blast wave pushed him down. The ground beneath him shook. He saw a flash of white. The roof caved in.

"We can't believe we got out of this alive," the chef told Reuters in a central district of the Lebanese capital. "People were bleeding, lying on the ground, running around in the streets...It was like a nightmare."

Lebanese rescue teams recovered bodies and hunted for missing people in the wreckage of buildings a day after a massive warehouse explosion sent a devastating blast wave across Beirut, killing at least 135 https://t.co/2mtCm2MLNn pic.twitter.com/DGGgJPKFxR

Staff stood aghast near the restaurant the morning after a massive warehouse explosion a few kilometres away at Beirut port, which investigators blamed on negligence. Once the shock subsided, Assi said, the next feeling was anger.

"Why should innocent people have to suffer like this because of worthless rulers? Is this how cheap our lives are to them?"

Beirut's residents woke up on Wednesday to a capital in desolation. Rescuers dug through the rubble for survivors in a city that was already buckling under the weight of a financial meltdown and a coronavirus outbreak.

The explosion killed at least 135 people, injured 5000 and pushed up to 250,000 out of their homes after the shockwaves ripped out doors and shattered windows far inland.

The death toll is expected to rise. Officials blamed the blast on a huge stockpile of highly explosive material stored for years in unsafe conditions at the port.

A number of Beirut port officials are being placed under house arrest pending an investigation into the explosion, Lebanon's government says.

Relatives gathered at the cordon to Beirut port seeking information on those still missing. Many of those killed were port and custom employees, people working in the area or those driving nearby during the Tuesday evening rush hour.

The explosion was the most powerful ever to rip through Beirut, a city still scarred by civil war that ended three decades ago and reeling from an economic meltdown and a surge in Covid-19 infections. The blast rattled buildings on the Mediterranean island of Cyprus, about 160km away.

President Michel Aoun said 2750 tonnes of ammonium nitrate, used in fertilisers and bombs, had been stored for six years at the port without safety measures, after it was seized.

In an address to the nation during an emergency cabinet session, Aoun said: "No words can describe the horror that has hit Beirut last night, turning it into a disaster-stricken city".

He said the government was "determined to investigate and expose what happened as soon as possible, to hold the responsible and the negligent accountable."

An official source familiar with preliminary investigations blamed the incident on "inaction and negligence", saying "nothing was done" by committees and judges involved in the matter to order the removal of hazardous material.

The cabinet ordered port officials involved in storing or guarding the material since 2014 to be put under house arrest, ministerial sources told Reuters. The cabinet also announced a two-week state of emergency in Beirut. 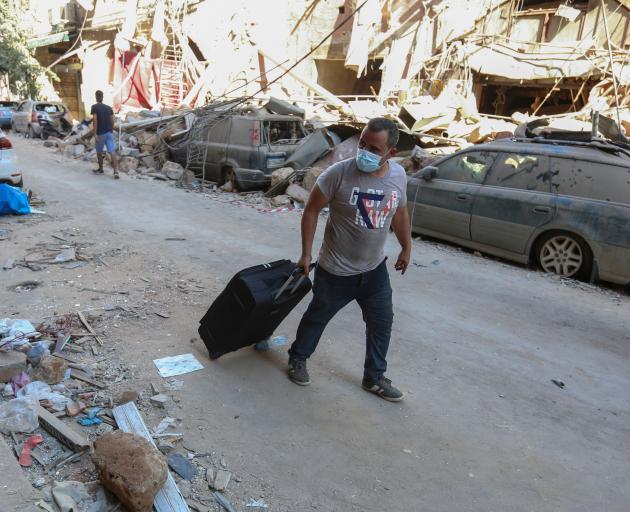 A man pulls his belongings along a street as he evacuates from his damaged house. Photo: Reuters

IT'S AS IF RULERS 'WANT US TO DIE'

Ordinary Lebanese, who have lost jobs and watched savings evaporate in Lebanon's financial crisis, blamed politicians who have overseen decades of state corruption and bad governance.

"This explosion seals the collapse of Lebanon. I really blame the ruling class," said Hassan Zaiter (32), a manager at the heavily damaged Le Gray Hotel in downtown Beirut.

For many, it was the latest blow they blamed on a clutch of sectarian political elites that have ruled for decades.

The government has vowed to hold those responsible for the explosion to account.

But for workers and residents sweeping up debris in the popular nightlife neighbourhood of Gemmayze, clouds of dust swirling around them, it sounded just like the empty promises they were tired of.

Thousands of Lebanese have protested since October against state waste and corruption that pushed the country into financial ruin. The local currency has since crashed, sending prices soaring and leaving many poor.

"What more can happen to us other than death? It's as if they want us to die," Rony Abu Saad said outside the blown-out storefront of his sandwich shop. One of his employees had died under the wreckage inside.

"This country now looks like its rulers, the garbage and rubble in the streets, it looks like them," he said. "If any of them has a speck of consciousness left, they would leave."

Around him, shards of glass and twisted metal littered the pub street. The roof of a large petrol station had crashed atop its pumps. A loft building lost all its balconies.

In one alleyway, collapsed billboards and tree branches smashed a row of cars. In another, a man paced back and forth on the sidewalk muttering "this is war."

Abu Saad, whose furniture in his house near the sandwich shop was torn to pieces, hadn't slept all night. "We're all still in shock, none of us can understand the scale of the destruction," he said.

The wreckage shocked many even in a city that has weathered crisis after crisis, including a 1975-1990 civil war, a 2006 war with Israel and a series of assassination bombings.

"The worst part is this government and all those before it did nothing. Nobody cares. Did they know this warehouse was there, and they kept it there near our houses?" said Habib Medawar (65) the landlord of a building where two people had died.

He sat outside in a yellow plastic chair, staring out towards the sea. "I don't want to do anything, I can't even bring myself to go inside."

Nearby, Pierre Mrad, the medical director of a hospital in Gemmayze that was knocked out of service, held back tears. The blast had wounded staff and killed one of the nurses.

"We evacuated all the patients. The hospital will have to be rebuilt. There's nothing left, nothing to be done right now," he said. "We have to start all over. What more can I say?" 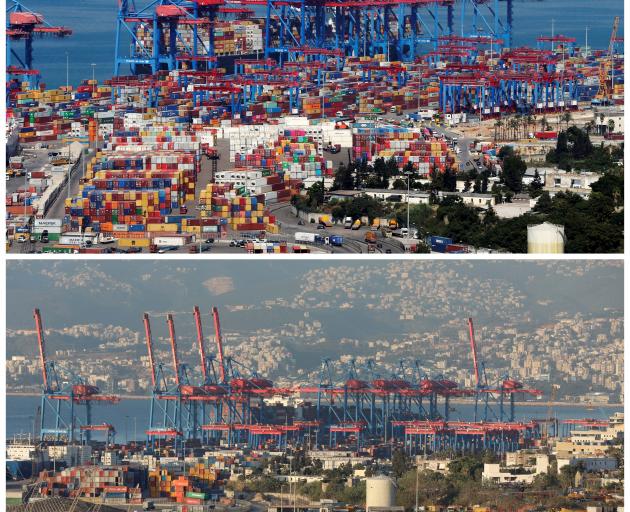 The port of Beirut on August 22, 2019 and after Tuesday's blast. Photo: Reuters

The Red Cross was coordinating with the Health Ministry to set up morgues as hospitals were overwhelmed. Health officials said hospitals were struggling with the big influx of casualties and were running out of beds and equipment to attend to the injured and those in critical condition.

Beirut's Clemenceau Medical Center was "like a slaughterhouse, blood covering the corridors and the lifts," said Sara, one of its nurses.

Beirut Governor Marwan Abboud told Al Hadath TV that collective losses after the blast might reach $US10 billion  ($NZ14.9 billion) to $US15 billion, saying the estimate included both direct and indirect losses related to business.

"This is the killer blow for Beirut, we are a disaster zone," said Bilal, a man in his 60s, in the downtown area.

Offers of international support poured in. Gulf Arab states, who in the past were major financial supporters of Lebanon but recently stepped back because of what they say is Iranian meddling, sent planes with medical equipment and other supplies.

Turkey said it would send 20 doctors to Beirut to help treat the injured, as well as medical and relief assistance, Iraq pledged fuel aid while Iran offered food and a field hospital.

Iranian Supreme Leader Ayatollah Ali Khamenei said in a tweet: "We sympathize with the dear Lebanese citizens and stand by them in the painful tragedy of the Beirut port explosion...Patience in the face of this incident will be a golden leaf of honour for Lebanon."

The United States, Britain, France and other Western nations, which have been demanding political and economic change in Lebanon, also offered aid. Germany, the Netherlands and Cyprus offered specialised search and rescue teams.

Two French planes were expected to arrive on Thursday with 55 rescuers, medical equipment and a mobile clinic. French President Emmanuel Macron will also visit Lebanon on Thursday. Other Arab and European countries are sending doctors, mobile hospitals and equipment.

"Patience in the face of this incident will be a golden leaf of honour for Lebanon."

I'm sure the people of Beirut will be comforted by these wise words. Meaningless drivel from the Iranian leader.