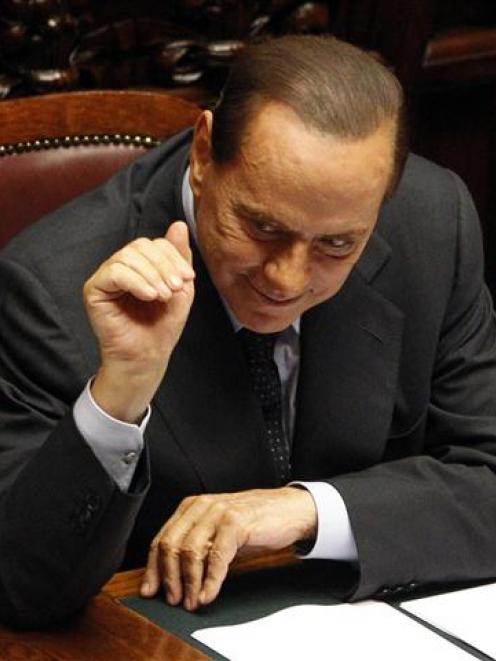 As Rome grapples to contain a financial market storm that risks sending its 1.9 trillion euro ($2.6 trillion) public debt pile sliding out of control, Berlusconi's legal problems have proved an increasingly surreal distraction from the crisis.

Newspapers' political pages on Friday were packed with photographs of some of the young women associated with Berlusconi and businessman Giampaolo Tarantini, suspected of providing prostitutes for the premier's parties.

Berlusconi's lawyer Niccolo Ghedini issued a statement saying the premier was unaware of any connection between Tarantini and prostitution and repeating that there was nothing scandalous about the "convivial" evenings at his residences.

The prime minister himself is not directly implicated, although magistrates want to interview him as a witness in a related investigation into suspected extortion.

Newspapers lavished coverage on the dozens of "papi girls" and carried fresh revelations from a probe into Tarantini, an entrepreneur from the southern city of Bari whom prosecutors believe provided the women in exchange for business favours.

Eight people, including Tarantini, have been indicted in the affair.

"Gianpi, who are you bringing me this evening?", Berlusconi was quoted as saying in the transcript of a wiretapped conversation with Tarantini, arrested with his wife earlier this month. Having completed their investigation, prosecutors will now ask a judge to allow the case to go to trial.

One woman, actress Manuela Arcuri, found herself an unlikely Internet heroine after wiretaps showed she refused repeated requests from Tarantini to become involved in the parties.

In a letter to the conservative political daily Il Foglio, published on the paper's website on Friday, Berlusconi said he had nothing to be ashamed of and that he had faced an "intolerable" campaign by the press and magistrates since his election in 2008.

"The problem is that for the past three years there has been a mischievous attempt to transform my private life into a crime," he said, adding that he would not back down and would serve out his full term until elections scheduled in 2013.

However the latest revelations -- separate from the "Rubygate" case in which Berlusconi is accused of paying for sex with a minor -- add to an ever more tangled web around the 74-year-old prime minister.

The opposition has stepped up calls for Berlusconi to resign, saying he has been too distracted by his personal legal problems and internal coalition battles to provide effective leadership in a crisis that now threatens the whole euro zone.

Italy, the euro zone's third largest economy, is dependent on help from the European Central Bank to keep a lid on its borrowing costs and is under heavy pressure to pass tough reforms to cut debt and revive its stagnant economy.

A poll in left-leaning La Repubblica on Friday showed support for his centre-right bloc at 37.5 percent, against 44 percent for the left and a similar number in favour of a broad-based government of national unity to steer Italy out of crisis.

Apart from "Rubygate" and three tax fraud trials, magistrates are still waiting for a date to question Berlusconi over an alleged attempt by Tarantini to extort money from him in return for his silence over the prostitution allegations.

Magistrates have also moved closer to pressing charges over allegations connected with an attempted takeover by Italian investors of Banca Nazionale del Lavoro in 2005, a decision Ghedini described as "absolutely incredible".

On Monday, Berlusconi is set to attend a hearing in Milan of a case in which he is accused of bribing his former lawyer David Mills to offer false testimony about his business interests.