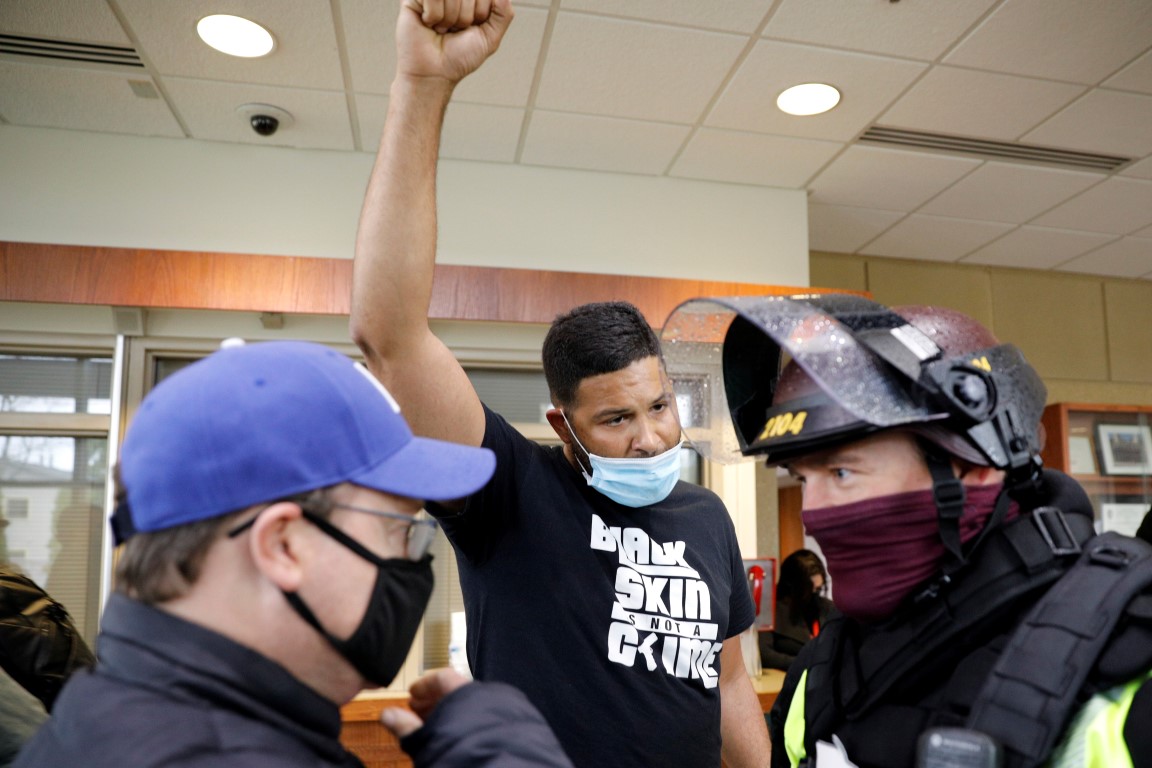 An activist confronts an officer inside the Brooklyn Center Police Department after the death of Daunte Wright. Photo: Reuters
The fatal police shooting of a 20-year-old Black man in a Minneapolis suburb appeared to be an "accidental discharge" by an officer who drew her gun instead of a Taser during a struggle at a traffic stop, the city's police chief says.

The shooting on Sunday (local time) of Daunte Wright triggered unrest in Brooklyn Center, Minnesota, with police firing teargas and rubber bullets to disperse protesters demonstrating against the latest in a string of US police killings of Black men.

On Monday, Minnesota Governor Tim Walz set a curfew for the counties that include Minneapolis and St. Paul from 7pm until 6am on Tuesday, in a state already facing heightened security during the trial of Derek Chauvin, the former white Minneapolis police officer charged with murdering George Floyd.

Brooklyn Center Police Chief Tim Gannon told a news briefing that a routine traffic stop, triggered by an expired car registration, escalated into a deadly shooting when officers ran a check on Wright and found an outstanding warrant for him.

Police video footage presented at the briefing showed an officer trying to handcuff Wright next to the car, before he breaks free and gets back inside the car. At that point, a second officer yells, "Taser, Taser, Taser," before firing a single shot from her handgun, according to the recording.

"Holy shit, I just shot him," the policewoman is heard to shout as the car rolls away.

"This appears to me, from what I viewed and the officers' reaction and distress immediately after, that this was an accidental discharge that resulted in the tragic death of Mr. Wright," Gannon said, adding that the investigation was in its early stages and based on evidence reviewed by the police.

Brooklyn Center Mayor Mike Elliott said the shooting "couldn’t have happened at a worse time" with the trial of Chauvin, who knelt on Floyd's neck for more than nine minutes, entering its 11th day on Monday. The mayor called for the officer, who has not been identified, to be fired.

The killing in Brooklyn Center, like several recent high-profile shootings, including the 2016 death of Philando Castile in St. Paul, Minnesota, grew out of a traffic stop, a tactic that many activists, civil rights groups and political leaders say is a form of harassment of communities of color.

Terri Nelson, legal director of the American Civil Liberties Union of Minnesota, pointed to a Hennepin County Public Defenders Office report which found that 54% of drivers stopped for minor equipment violations between January and September in 2018 in Minneapolis were Black, compared with 19% of the city's population.

"These are highly discretionary and when you have that discretion, either implicitly or explicitly police biases come into the picture," Nelson said.

Wright's mother, Katie Wright, told reporters on Sunday she had received a call from her son telling her that police had pulled him over for having air fresheners dangling from his rear-view mirror, which is illegal in Minnesota. She could hear police tell her son to get out of the vehicle, she said.

The police chief said "a hanging item from the rear-view mirror" was discovered when police pulled Wright over.

Wright's father, Aubrey, told the Washington Post that his son was on his way to get his car washed before the encounter with police. He said Daunte had dropped out of high school a few years earlier due to a learning disability and had been working various jobs to help support his 2-year-old son.

President Joe Biden urged a "full-blown investigation" into Wright's death and called on protesters in Minnesota to be peaceful. He condemned violence and looting, pockets of which were reported in Brooklyn Center overnight.

"It is really a tragic thing that happened, but I think we've got to wait and see what the investigation shows," Biden told reporters at the White House.

Governor Walz, a Democrat, said he was going to push the state's legislature to hold hearings to consider policing reforms that have been adopted in other states that are supported by law enforcement and "would reduce the chance of a routine traffic stop escalating to a loss of life."

Ben Crump, a civil rights attorney who helped win a $27 million legal settlement for the Floyd family with the city of Minneapolis, said he was also representing the Wrights.

"Daunte Wright is yet another young Black man killed at the hands of those who have sworn to protect and serve all of us - not just the whitest among us," Crump said in a statement. "As Minneapolis and the rest of the country continue to deal with the tragic killing of George Floyd, now we must also mourn the loss of this young man and father."