German tennis great Boris Becker has been jailed for two years and six months by a London court for hiding hundreds of thousands of pounds of assets after he was declared bankrupt.

Becker was convicted earlier this month of four charges under Britain's Insolvency Act, including failing to disclose, concealing and removing significant assets following a bankruptcy trial.

The 54-year-old six-times Grand Slam champion of the 1980s and 90s was found guilty of transferring money to his ex-wife Barbara and estranged wife Sharlely after his 2017 bankruptcy.

"It is notable you have not shown remorse or acceptance of your guilt," judge Deborah Taylor told him as she sentenced him at London's Southwark Crown Court on Friday.

"While I accept the humiliation you have felt as a result of these proceedings, you have shown no humility."

The judge said Becker would serve half his sentence behind bars and the remainder on licence. Becker, whose partner Lillian and son Noah were in court, looked straight ahead and showed no emotion as the sentence was handed down.

He was previously convicted of tax evasion in Germany in 2002, for which he received a suspended prison sentence. 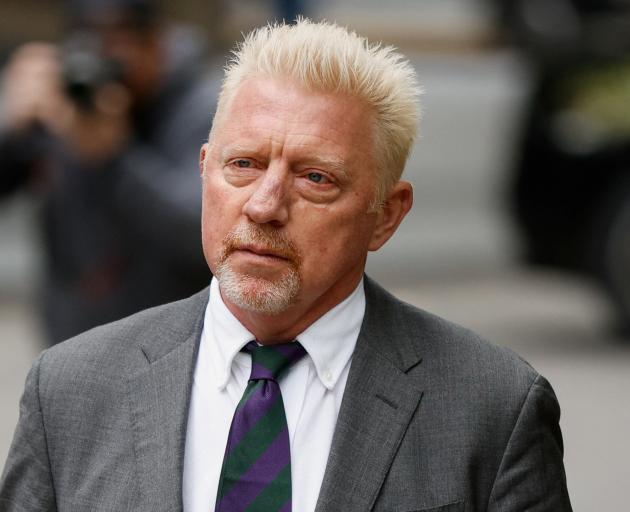 Boris Becker wore a tie in the purple and green colours of the Wimbledon tournament as he appeared in court on Friday. Photo: Reuters

The trial had heard details of Becker's career and how the former world No 1, who won the Wimbledon championship three times, lost his fortune following his retirement.

The jury heard how he claimed not to know the location of some of his trophies, how he took a high-interest loan from one of Britain's richest businessmen, and tried to avoid bankruptcy by claiming to have diplomatic protection from the Central African Republic.

Becker's lawyer, Jonathan Laidlaw, had told the court that the tennis player had been left with "literally nothing to show for what was the most glittering of sporting careers" and his case was "nothing short of tragedy" as he appealed for leniency.

When Becker won his first Wimbledon final in 1985 aged 17, he was the youngest and first unseeded player to claim the men's singles title. He went on to two win more Wimbledon titles.

Becker wore a tie in the purple and green colours of the Wimbledon tournament as he appeared in court on Friday.

Prosecutor Rebecca Chalkley accused Becker of "playing the system with bad faith" by concealing and transferring assets, and had deprived creditors of more than £2 million ($NZ3.89 million) in assets, none of which had so far been paid back.

"When it suited him, he made full disclosure, when it didn't, he didn't," she said as she urged the judge to pass a custodial sentence.

Becker was made bankrupt in connection with a debt to private bankers Arbuthnot Latham & Co, and under the terms of the bankruptcy order, he was bound to provide full disclosure of assets.

He was convicted of failing to declare a property in Germany, hiding an €825,000 ($NZ1.34 million) bank loan and shares in a Canadian technology firm.

"We have noted the verdict regarding Boris Becker with regret," the German Tennis Federation (DTB) said. "We wish him a lot of strength for the future. He will forever be part of our tennis family."

Becker, who was head of men's tennis at the DTB from 2017-2020, had denied all the charges, saying he had cooperated with the bankruptcy proceedings - even offering up his wedding ring - and had relied on his advisers.

He was acquitted at the trial of 20 other counts, including charges that he failed to hand over other assets, including two Wimbledon trophies and an Olympic gold medal.

"His reputation, an essential part of the brand, which gives him work, is in tatters," Laidlaw said.

"His fall is not simply a fall from grace and amounts to the most public of humiliations." 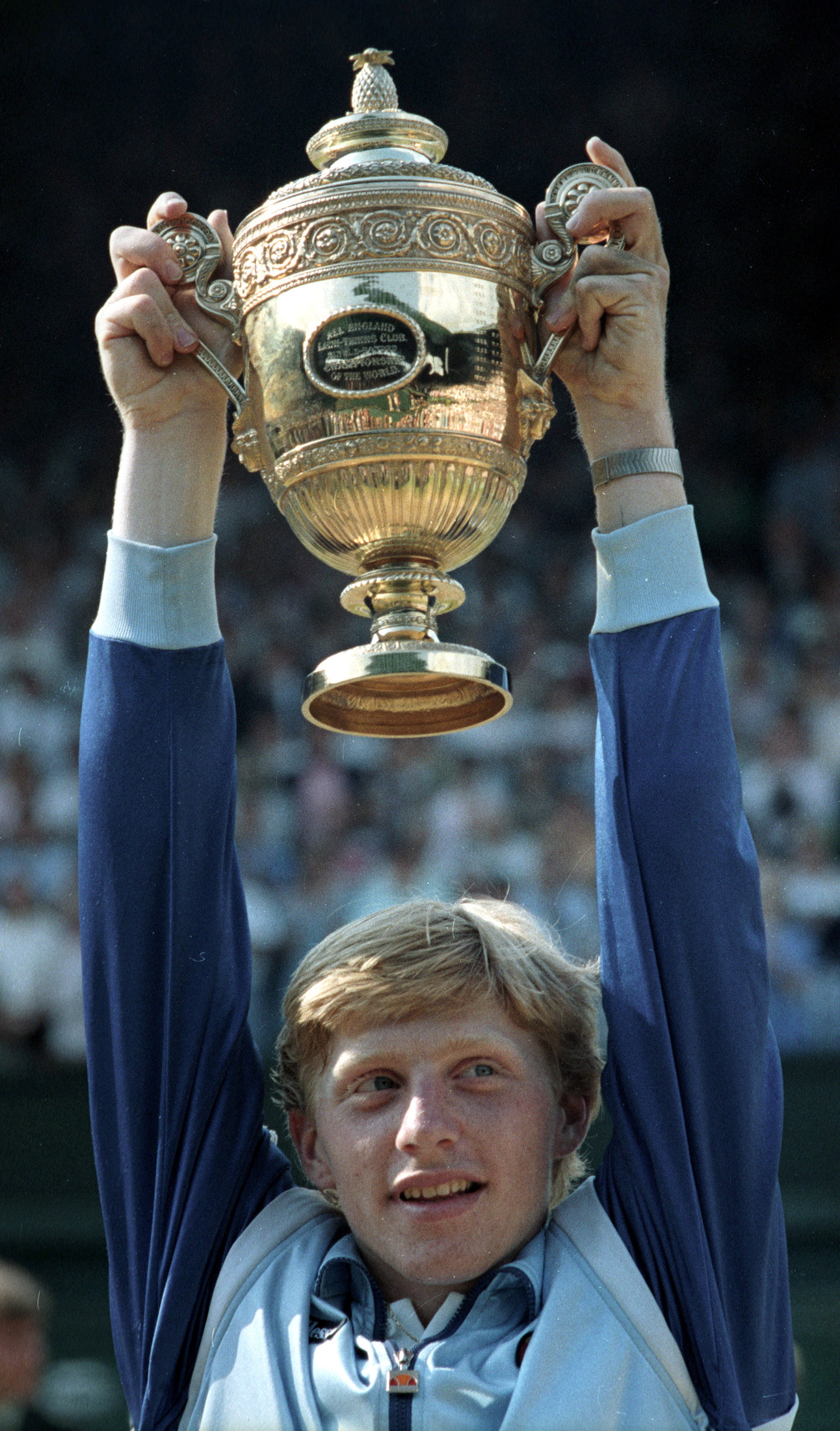 Boris Becker's thunderous delivery earned him the nickname 'Boom Boom' as a 17-year-old Wimbledon winner in 1985 but on Friday, aged 54 and bust, the German great was told he must serve time in prison.

The sentence was the latest bombshell in the life of a sporting superstar whose love life and financial problems have generated as many headlines in recent years as his athletic prowess ever did.

Much of his fortune disappeared as a result of his tax problems, while continuing to maintain a lavish lifestyle, some dubious investments and a multi-million dollar divorce settlement with first wife Barbara in 2001.

In 1999 he fathered a child with a Russian model, Angela Ermakova, after a brief sexual encounter in London's Nobu restaurant while his wife was pregnant with their second child.

The polish of his post-playing life as a BBC television tennis commentator, and a spell as coach to world No 1 Novak Djokovic, contrasted with the ongoing chaos of his personal affairs.

In 2018 he claimed diplomatic immunity from the bankruptcy proceedings by saying he had been appointed sports envoy to the European Union for Central African Republic and had received a passport at an official ceremony.

Becker had never visited the country, whose foreign minister later said the passport was a "clumsy fake" and launched an inquiry.

On court, Becker was simply sensational. In 1985 he became the first German and first unseeded player to win the Wimbledon singles title, defeating South African-turned American Kevin Curren in four sets, as a callow teenager.

In 1986, with bubbling enthusiasm and using his heavy forehand and spectacular diving volleys to good effect, Becker defended his title successfully against scowling rival Ivan Lendl.

The pair played each other 21 times in the 1980s and early 90s, always with an undercurrent of friction.

While Lendl ultimately edged their career rivalry 11-10 it was Becker who won the three Grand Slam finals they contested, with the German once accusing Lendl of not being "mentally tough".

Becker also reached the Wimbledon final in 1988, losing to Sweden's Stefan Edberg. He avenged that loss in a rematch the following year and then lost to the Swede again in the 1990 final.

In 1991 he reached a fourth successive Wimbledon final but lost to compatriot Michael Stich.

He retired with a career tally of 49 singles titles and 15 doubles titles, but clay was always a weakness although he did win the 1992 Olympic men's doubles gold on the surface in Barcelona.