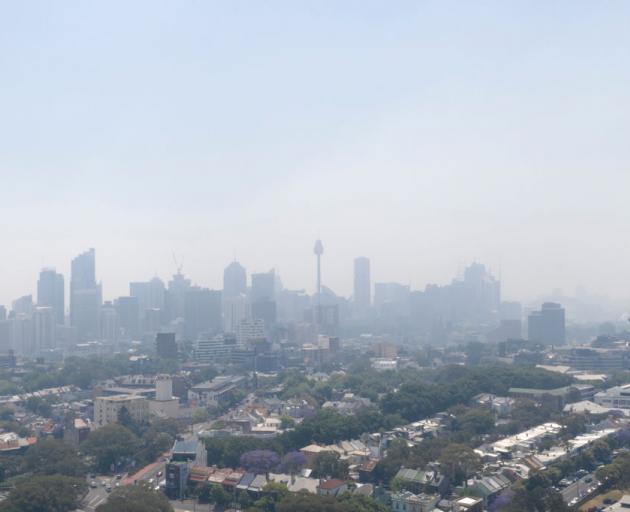 The smoke haze that blanketed central Sydney on Tuesday is expected to continue into Wednesday. Photo: Getty Images
Australian firefighters are set for a brief reprieve from difficult bushfire conditions around the state of New South Wales but are bracing for fresh misery in coming days.

Two fires at "emergency" warning level on Tuesday have since been downgraded to "advice" level - a persistent 146,000-hectare blaze at Gospers Mountain in the Hawkesbury region, and a fire at Myall Creek, on the Northern Tablelands.

A trained koala detection dog, named Bear, is sniffing out charred bushland for injured animals that have been caught in Queensland and NSW bushfires. https://t.co/Ome4hpHUJp #7NEWS pic.twitter.com/MTG8eoppPS

Some 54 fires were burning around the state, with 22 uncontained on Wednesday. More than 1000 firefighters remain in the field.

Mr Fitzsimmons said that tough fire conditions in NSW would return on Thursday, with a weather system coming in from South Australia bringing hot easterly winds.

Unlike recent conditions, that would endanger much of southern NSW.

"This time, the indications are (it will be) the southern half of NSW with some of the more widespread, worst conditions. We've got a long way to go yet."

The Bureau of Meteorology, meanwhile, says the smoke haze that blanketed Sydney on Tuesday is expected to continue into Wednesday.

"We really aren't going to be out of the woods for the coming days with that air quality issue from smoke over the eastern part of the state," the bureau's NSW regional manager Ann Farrell told reporters.

Dust is also affecting air quality and a wind change expected on Thursday could exacerbate the problem, Ms Farrell said.

That change could trigger thunderstorms into the weekend, which won't bring much rain but could see lightning strikes ignite additional fires.

People with asthma or other breathing issues have been advised to stay indoors, avoid outdoor exercise and seek medical advice as needed.

Parts of NSW could also experience heatwave conditions this week with the state's west set to reach 40degCelsius and western Sydney to hit the high-30s.

"You're just talking about an extremely dry landscape which has proved extremely difficult to suppress and contain fires. With the wind changes in direction, strength, that exacerbates fire behaviour," Mr Fitzsimmons said.

The RFS on Tuesday said six lives and 577 homes had been lost to date this fire season, with more than 420 homes lost in the past fortnight.