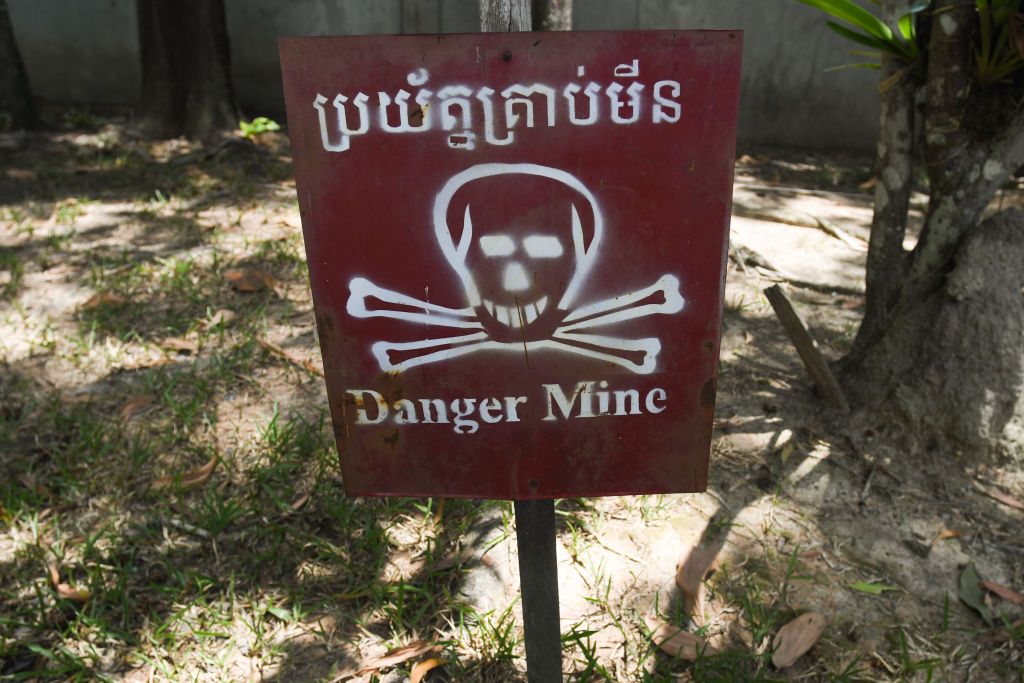 To date, just under half of the contaminated land has been cleared of mines. Photo: Getty Images
A 30-year civil war left Cambodia among the most heavily mined nations on earth but the aim is for the nation to be landmine-free by 2025, with ongoing Australian financial and technical support.

Buried land mines have claimed thousands of casualties over the last two decades despite a concerted international de-mining effort.

Some 4320 people were reported killed or injured in 1996 and that fell dramatically to just 77 casualties by 2019. A further 38 victims were reported for the first six months of this year.

To date, just under half of the contaminated land - or 1893 square kilometres - has been cleared, but Nick Beresford of the United Nations Development Fund (UNDP) is confident Cambodia will be landmine free by 2025, with ongoing help from Australia.

He said 1970sq km of land - the size of inner-suburban Sydney - still needed to be cleared but efforts would be bolstered through the training and deployment of 2000 extra de-miners from Cambodia's military ranks.

"While it is ambitious it has the full backing of the UN/UNDP and development partners," Beresford said. "Australia has been a key partner, not just through their generosity, but also the consistency of their support over the years."

Australia's post-Cold War involvement in Cambodia dates back to the 1991 Paris Peace Accords and the deployment of UN peacekeepers the following year to oversee elections, with mine clearing and the disarming of unexploded ordnances (UXOs) underway by 1994.

Since then Australia has spent $US100 million ($NZ150 million) on clearing explosive remnants of war (ERW), which accounts for landmines, mainly in the country's west near the Thai border, and UXOs in the eastern frontier with Vietnam.

Another $20 million has been allocated to the Cambodian Mine Action and Victims Assistance Authority for the next five years, with Canada, New Zealand, South Korea and Switzerland also chipping in.

"Cambodia has always been a focus country for us, globally," Australian ambassador Pablo Kang said.

"... 2025 is going to be difficult and I think the government acknowledges that as well. It's having the human resources and obviously the financial resources to finish the job."

He said there were a number of aspects to Australia's commitment including its signature to the Anti-Personnel Mine Ban Convention.

"There's a humanitarian aspect given Cambodia's very tragic history and just the sheer number of mines and UXOs that there are around the country, but also increasingly the economic benefits of decontaminating land and then that being freed up for productive agriculture purposes," he said.

An original 2010 deadline for clearing all landmines was revised to 2020 amid a low-level border conflict around the ancient temples at Preah Vihear, when Thailand added to the problem by using cluster-bombs on Cambodia, but geography is also an issue.

"Some of the biggest problems can be where land is sloping," Beresford said. "This clearance work must be done on hands and knees, crawling up a steep slope, wearing full protective gear."

"This does of course slow the work down."

Kang added that much of the focus will be on the northwest, which was heavily mined by the Khmer Rouge after they retreated towards the Thai border following the 1979 Vietnamese incursion of Cambodia, which ended Pol Pot's reign of terror.

Children, curious or just scavenging for scrap metal, are often among the victims but it's a problem that afflicts the entire country. In March 2018, one Australian was killed and another injured when a nearby landmine detonated during a military training exercise.

Kang said people often thought about de-mining "as people going out into the field and discovering mines and then blowing them up."

"But it's also about community awareness, and all the messaging, and you know; don't play with these things, report them," he said.

He added women were actively involved in the national mine clearing strategy.

That included managing operations, working as de-miners and in government consultations over where to clear with the focus firmly on productive agricultural land given Cambodia's struggling economy amid the pandemic.

Cambodia has emerged relatively unscathed from Covid-19 with just 234 confirmed cases, 164 recovered and no deaths.

But tourism has ground to a halt as a drought entered its second year and a once thriving garment industry has taken a hit after the European Union removed some trade preferences in response to the country's human rights record. Overseas workers have returned home with few prospects.

"So everyone is focusing on agriculture," Kang said.