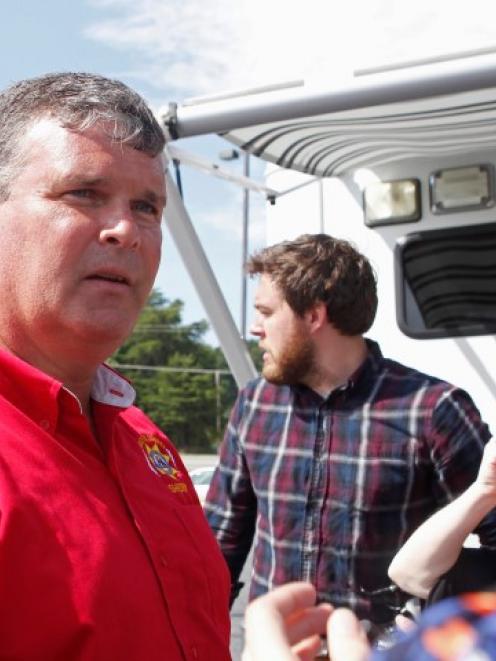 Marx, 48, died in a hail of bullets after wounding Forsyth County Sheriff's Deputy Daniel Rush, who officials say may have helped avert a slaughter.

"It would be a guess to think how many lives (the deputy) saved," Forsyth County Sheriff Duane Piper said. "Mr. Marx's intention was to get inside that front door and to take hostages."

Marx had filed a lawsuit against Piper's agency, saying that his life savings and weapons had been confiscated. He hoped to spare "unsuspecting citizens" the "lies and brutality that he has personally survived to date," Marx wrote in court filings.

He was expected at a court hearing on the criminal charges on Friday (local time).

Instead, deputies say, Marx, wearing a bulletproof vest and a gas mask and armed with multiple explosives and lots of ammunition, drove his SUV up to the courthouse about 10:30am. He tossed out homemade smoke grenades, pepper spray grenades and spike strips in an effort to keep law enforcement personnel from stopping his approach to the courthouse. He pulled up firing an AR-15 semi-automatic rifle, officials said.

Rush, a deputy working at the courthouse, confronted Marx, who officials say shot the officer in the shin through the windshield of his vehicle. Witnesses said Marx jumped from the SUV and started shooting his rifle. Officers returned fire, killing Marx.

"It was very close to a major catastrophe," Piper said.

Rush was taken to North Fulton Hospital, where he had surgery for a broken leg.

Forsyth County Chief Superior Court Judge Jeffrey Bagley said Marx was to have been in court last Monday to go on trial on a charge of possession of marijuana with intent to distribute. He never showed up but his attorney, Manny Arora, said Marx intended to plead guilty, so the case was reset for Friday.

When deputies alerted the judge of Friday's shooting, he was hustled from the bench and escorted down the stairs and out of the building. He said his first thoughts were of the shootings at the Fulton County Courthouse in 2005, when then-rape suspect Brian Nichols shot and killed Judge Rowland Barnes, a court reporter and a deputy.

Officials say Marx had long been planning the attack. Besides the grenades and homemade explosives, he had water, zip ties and several magazines of ammunition.

Piper said he didn't know Marx's motive, but "he came to stay a while. We don't know who he was coming to the courthouse for. I have to assume he was there to occupy the building."

He said investigators believed Marx's "intent was to take hostages."

Law enforcement described Marx as a "sovereign citizen," part of an anti-government group that has been tied to violent attacks on law enforcement around the country.

He was arrested in 2011 on charges of possession of marijuana with the intent to distribute and possessing a firearm during the commission of a felony.