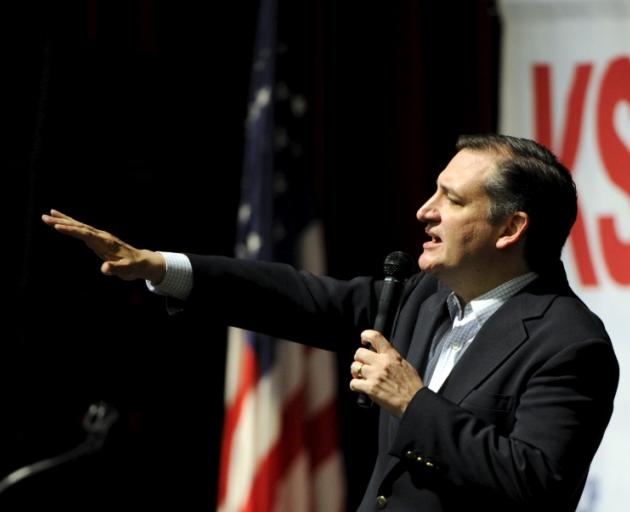 US Republican presidential candidate Ted Cruz won a nominating contest in Kansas and was leading in Maine on Saturday, denting front-runner Donald Trump's momentum and bolstering Cruz's case that he is the best alternative for those bent on stopping Trump.

On the Democratic side, front-runner Hillary Clinton's rival Bernie Sanders, a US senator from Vermont, won in Kansas, the state party said.

Kansas was one of five states holding nominating contests on Saturday, and Trump and Clinton were looking to strengthen their leads in the battle to pick nominees for the November 8 presidential election to succeed President Barack Obama.

"The scream you hear, the howl that comes from Washington, DC, is utter terror at what 'We the People' are doing together," Cruz told supporters in Coeur d'Alene, Idaho, after his win in Kansas.

Cruz, a US senator from Texas who has promoted himself to voters as a true conservative, in contrast to Trump, also won a non-binding "straw poll" of activists at the Conservative Political Action Conference near Washington, DC.

"What we saw in Kansas is a manifestation of a real shift in momentum," Cruz told reporters in Idaho.

Trump has a substantial lead in the delegates needed to secure the nomination at the Republican National Convention, but has come under a barrage of blistering attacks from his party's establishment.

The four Republican contests on Saturday together account for just 155 delegates. They are open only to registered Republicans, excluding the independent and disaffected Democratic voters who have helped Trump's surge to the lead.

Saturday's contests were the first since retired neurosurgeon Ben Carson dropped from the race, after polling in the single-digits in most of the nominating contests. Carson had drawn support from evangelical voters, a group that has also been a stronghold of Cruz.

Since winning seven of 11 contests on Super Tuesday, Trump has come under withering fire from a Republican establishment worried he will lead the party to a resounding defeat in November's election.

Mainstream Republicans have blanched at Trump's calls to build a wall on the border with Mexico, round up and deport 11 million undocumented immigrants and temporarily bar all Muslims from entering the United States.

Mitt Romney, the 2012 Republican presidential nominee, called Trump a phony and a fraud who was playing American voters for suckers, and 2008 nominee John McCain, a US senator from Arizona, said Trump's foreign policy views were uninformed and dangerous.

At the Conservative Political Action Conference on Saturday, US Senator Marco Rubio of Florida, who is also challenging Trump, criticized the media for fueling Trump's rise.

"I've been sitting here for five minutes and two of the three questions you've asked have been about Donald Trump," Rubio said during a question-and-answer session.

Rubio, a frequent target of Trump's attacks, also said he "didn't get into this race to beat up on other candidates." But, he added, "If someone keeps punching people in the face, eventually someone's going to have to stand up and punch him back."

At a rally in Rubio's home state on Saturday, Trump criticized his opponent, using a favorite nickname - "little Marco."

The anti-Trump forces have a short window to stop the caustic businessman, who has accumulated 319 of the 1237 delegates needed to win the nomination at July's Republican national convention, outpacing Cruz, who has 226 delegates.

On March 15, the delegate-rich states of Florida, Illinois, Ohio, Missouri and North Carolina will vote. Both Florida and Ohio use the winner-take-all method to allocate Republican delegates, making the stakes in those two states particularly high.

If Trump takes Florida and Ohio he would be nearly impossible to stop. There are a total of 358 delegates at stake in the five states voting March 15, including 99 in Florida and 66 in Ohio.

On the Democratic side, voters in Louisiana and Nebraska also were voting on Saturday in the race between Clinton, the former secretary of state, and Sanders.

Polls show Clinton with a big lead in Louisiana, which has a large bloc of the African-American voters who helped her roll up victories across the South on Super Tuesday. But the caucuses in less diverse Kansas and Nebraska were expected to be more suited to Sanders. The three states have a total of 109 delegates at stake.

Clinton has opened up a big delegate lead and Sanders might have a tough time making up the difference. All states in the Democratic race award their delegates proportionally, meaning Clinton can keep piling up delegates even in states she loses.