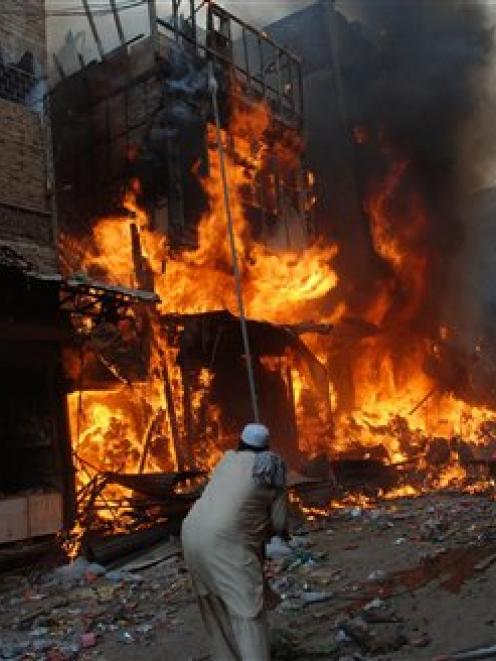 A man is seen at the spot of an explosion in Peshawar, Pakistan. A car bomb has torn through a market place in northwestern Pakistan, hours after US Secretary of State Hillary Rodham Clinton arrived in the country. (AP Photo/Mohammad Iqbal)
A car bomb has struck a busy market in northwestern Pakistan, killing 100 people - mostly women and children - as visiting Secretary of State Hillary Rodham Clinton pledged US support for Islamabad's campaign against Islamic militants.

More than 200 people were wounded in the blast in the main northwestern city of Peshawar, the deadliest in a surge of attacks by suspected insurgents this month. The government blamed militants seeking to avenge an army offensive launched this month against al-Qaida and Taliban in their stronghold close to the Afghan border.

The bombing was the deadliest since explosions hit homecoming festivities for former Prime Minister Benazir Bhutto in Karachi in October 2007, killing about 150 people. Bhutto was later slain in a separate attack.

The bomb destroyed much of the Mina Bazaar in Peshawar's old town, a warren of narrow alleys clogged with stalls and shops selling dresses, toys and cheap jewelry that drew many female shoppers and children in the conservative city.

The blast collapsed buildings, including a mosque, and set scores of shops ablaze. The wounded sat amid burning debris and parts of bodies as a huge plume of gray smoke rose above the city.

Crying for help, men tried to pull survivors from beneath wreckage. One man carried away a baby with a bloody face and a group of men rescued a young boy covered in dust, but others found only bodies of the dead. A two-story building collapsed as firefighters doused it with water, triggering more panic.

"There was a deafening sound and I was like a blind man for a few minutes," said Mohammad Usman, who was wounded in the shoulder. "I heard women and children crying and started to help others. There was the smell of human flesh in the air."

Clinton, on her first visit to Pakistan as secretary of state, was a three-hour drive away in the capital, Islamabad, when the blast took place. Speaking to reporters, she praised the army's anti-Taliban offensive in South Waziristan and offered US support.

Standing beside her, Pakistani Foreign Minister Shah Mahmood Qureshi said the violence would not break his government's will to fight back.

"The resolve and determination will not be shaken," Qureshi said. "People are carrying out such heinous crimes - they want to shake our resolve. I want to address them: We will not buckle. We will fight you. We will fight you because we want peace and stability in Pakistan."

Peshawar, the economic hub of the northwest and the seat of the provincial government, has long been a favorite target of militants who control large parts of territory to the west in tribal regions near the Afghanistan border. Extremism has flourished there since it was used as a staging ground in the 1980s for U.S.-funded fighters preparing to battle the Soviet-installed regime in Afghanistan.

No group claimed responsibility for the bombing, but that is not unusual, especially when the victims are Pakistani civilians. North West Frontier Province Information Minister Mian Iftikhar Hussain said 100 people were killed. A doctor said 60 of the dead were either women or children.

Three bombs have exploded in Peshawar this month, including one that killed more than 50 people. They are part of at least 10 major attacks in Pakistan that have killed 250 people either claimed by or blamed on Taliban militants.

Most have targeted security forces, but some bombs have gone off in public places, apparently to undercut support for the army's assault on the border and expose the weakness of the government.

The Taliban have warned Pakistan that they would stage more attacks if the army does not end its ground offensive in the South Waziristan tribal region, where the military has sent 30,000 troops to flush out insurgents. South Waziristan is a major base for the Pakistani Taliban and other foreign militants.

"We are hitting them at their center of terrorism, and they are hitting back targeting Peshawar," he said. "This is a tough time for us. We are picking up the bodies of our women and children, but we will follow these terrorists and eliminate them."