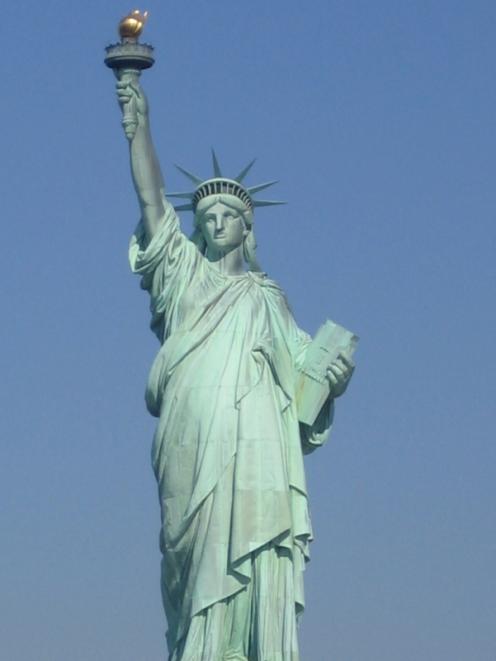 Statue of Liberty
The Statue of Liberty will reopen this weekend despite the federal government shutdown, thanks to a deal reached between New York Governor Andrew M. Cuomo and U.S. parks officials.

The state would fully fund the daily cost of federal workers at Liberty Island National Park by paying $US61,600 per day to the federal government, Cuomo's office said.

Cuomo and state lawmakers said the state could not afford another shutdown of the park, which was shuttered for eight months after superstorm Sandy. According to the latest National Park Service figures, the Statue of Liberty generated $US174 million in tourism, concession licenses and other economic activity in 2011. The landmark usually attracts about 10,000 visitors daily.

"The Statue of Liberty is one of this country's most recognizable landmarks, attracting millions of visitors to the state every year, and its closure these last 12 days has had a terrible impact on the local economy and tourism industry," Cuomo said in a news release.

"Every day that Liberty Island is closed means we are losing visitors who would otherwise be spending at our local businesses-not to mention the employees who maintain the park and have been forced out of work."

The governor said he realized the opening would boost businesses during Monday's Columbus Day holiday: "I am pleased to reopen Lady Liberty to visitors and look forward to seeing local businesses bustling once again. We will not allow this international symbol of freedom to remain closed because of the dysfunction and gridlock of Washington."

The deal was praised also by Senate Majority Coalition Co-Leader Dean G. Skelos, a Republican, who said the landmark greeted his grandparents when they arrived from Greece. "For years, the Statue of Liberty has stood as a powerful symbol of freedom and hope for millions of immigrants pursuing the American dream," he said.

Federal officials have been talking with various states' governors to reopen some national parks during the furlough of its employees.

The federal government has been losing $50,000 daily in concessionaire fees, Cuomo's office said.

But whatever New York and other states pay to the federal government to cover expenses will not be reimbursed unless Congress passes a law to do so.

Under Cuomo's deal with Jewell, the state will pay for the first four days of the reopening with funds from the state's tourism budget. If Cuomo wants Lady Liberty to remain open, he must give federal officials two days notice for every additional two days he wants it open.

State officials said more than 400 jobs have been lost and more are threatened, including at Statue Cruises, which ferry people to the Liberty Island.

"Not only has our daily ferry ridership fallen 50 to 70 percent these last two weeks, we have 180 jobs at risk-employees and their families who will be hard hit if this park closure continues," Mike Burke, chief operating officer of Statue Cruises, said in the news release.