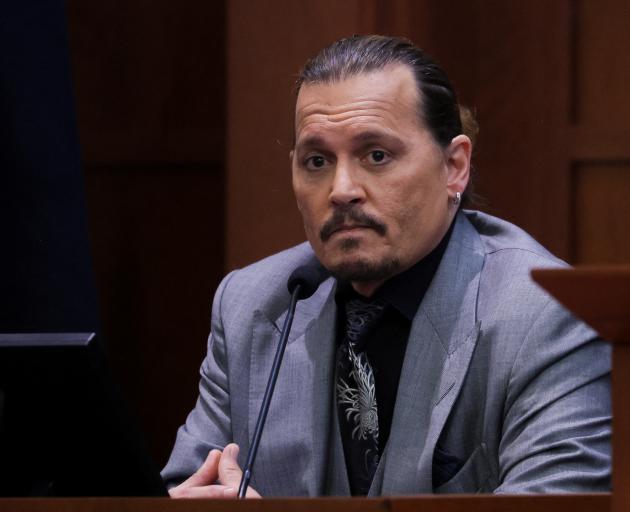 Johnny Depp said he would remove himself from heated arguments, sometimes locking himself in a bedroom or bathroom, and never struck his ex-wife. Photo: Reuters
Actor Johnny Depp, testifying in a defamation case against his former wife Amber Heard, says she was the one who became violent in their relationship and that her false accusations cost him "nothing less than everything."

In a second day on the witness stand in a Virginia courtroom, Depp said the couple had frequent arguments that included "demeaning name calling" and "bullying" by Heard.

"It seemed like pure hatred for me," Depp said. "If I stayed to argue, eventually, I was sure it was going to escalate into violence, and oftentimes it did."

The Pirates of the Caribbean star (58) is suing Heard for $US50 million ($NZ73 million) after she accused him of abuse.

Depp  said it was Heard (35) who would "strike out" with a slap or shove. During one argument, Heard threw a vodka bottle at Depp's hand, cutting off the top of his right middle finger and exposing bone, he said. 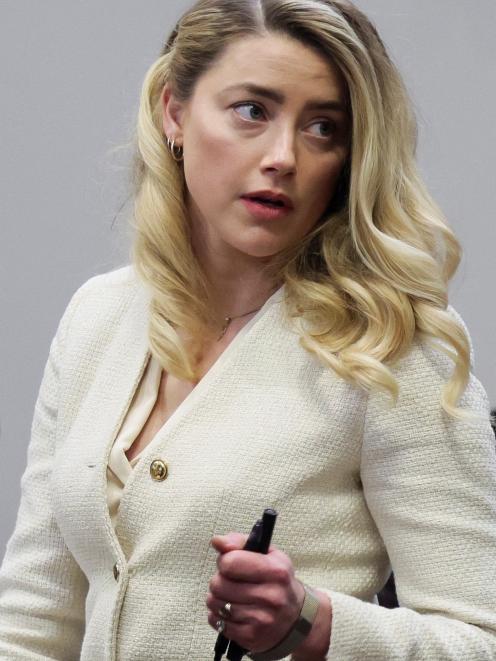 Amber Heard has brought her own libel claim against Johnny Depp, saying he smeared her by calling her a liar. Photo: Reuters

The actor said he felt like he was suffering some kind of breakdown and began writing on the wall with blood from the injury. He said he wrote reminders of "lies" Heard had told him.

"She has a need for violence. It erupts out of nowhere," said Depp.

In a similar legal case in Britain, Heard denied throwing a bottle and severing Depp's finger. She said she threw things only to escape when he was beating her, and once punched him because she feared he would push her sister down a flight of stairs.

On Wednesday, Depp described an incident in which he said Heard repeatedly punched him. The actor said he put his arms around her to calm her, and their foreheads touched.

According to Depp, Heard accused him of "head butting" her and breaking her nose, returning minutes later with a tissue she said was stained with blood. Depp said he later retrieved the tissue and found the red stain came from nail polish.

The actor said he would remove himself from heated arguments, sometimes locking himself in a bedroom or bathroom, and never struck Heard. "My main goal was to retreat," he said.

Depp has accused Heard, also an actor, of defaming him when she penned a December 2018 opinion piece in the Washington Post about being a survivor of domestic abuse.

Depp said Heard's allegations cost him "nothing less than everything." A new Pirates movie was put on hold, and Depp was dropped from the Fantastic Beasts film franchise, a Harry Potter spinoff.

"When the allegations were made, were rapidly circling the globe, telling people I was a drunken, cocaine-fuelled menace who beat women - suddenly in my 50s - it's over," he said.

"I lost then," he added. "No matter the outcome of this trial, I will carry this for the rest of my days."

Attorneys for Heard, who just started their cross-examination of Depp late on Wednesday, have argued that she told the truth and that her opinion was protected free speech under the US Constitution's First Amendment.

A state court judge in Fairfax County, Virginia, is overseeing the trial, which is in its second week and is expected to last six weeks.

Less than two years ago, Depp lost a libel case against The Sun, a British tabloid that labelled him a "wife beater." A London High Court judge ruled he had repeatedly assaulted Heard.

Depp and Heard, known for her roles in Aquaman and Justice League, were married for about two years. Their divorce was finalized in 2017.

Heard has brought her own libel claim against Depp, saying he smeared her by calling her a liar. Heard's counterclaim, seeking $US100 million, will be decided as part of the trial.