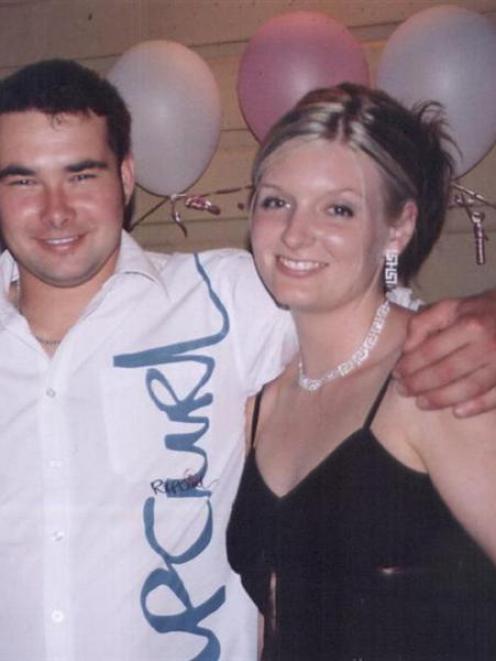 Shane O’Neill, 28, and his fiancé Stacey Lambert, 24. Photo from New South Wales police.
A father who drowned while trying in vain to save his two young sons after they fell from a wharf on the NSW south coast was to marry his long-time love next March, his employer says.

Shane O'Neill, a butcher from Kalaru near Bega, dived into dark, choppy waters to try to rescue four-year-old Riley and 15-month-old Travis after they fell from Tathra Wharf near Bega, just after 8pm (10pm NZT) on Tuesday.

Mr O'Neill, who would have turned 29 on Saturday of next week, was fishing off the wharf as Travis sat nearby in a pram held by Riley when the pram and boys tumbled into the water.

The panicked father quickly dived in to save his children but all three drowned and were unable to be revived by paramedics.

A 37-year-old local fisherman, who jumped into the water to help, was taken to hospital on Tuesday night but discharged early on Wednesday morning with "superficial injuries", a spokeswoman for Greater South Area Health Service said.

Mr O'Neill's fiancee, Stacey Lambert, whom he was to marry in March next year, was informed of the deaths on Tuesday night.

"She's obviously in shock at the moment, looking for answers I suppose, like everyone else." Ms Lambert works part-time at the local Woolworths in Bega.

Mr O'Neill's employer, Alan Wheatley of Kydds Butchers in Bega, said on Wednesday he was "devastated" by the news.

He had worked with Mr O'Neill for about five years and told AAP the father of two had sold his stake in the business about three years ago to buy his family's first home in Kalaru.

"His girlfriend Stacey ... they were getting married in March.

"They were a very close family ... they were beautiful kids." Mr Wheatley said Mr O'Neill was "the best employee you could ever have".

"He loved his fishing, diving, camping ... anything outdoors, motorbikes.

"We don't even want to be here. We're just here taking orders to get orders out of the way then we're going home."

Paul Alker, of Tathra Butchery, has known Mr O'Neill for almost 20 years and said he was struggling to grasp what had happened.

"I only spoke to him on Thursday. He said he was going to stop by and have a beer ... he should have stopped here yesterday because he had to go past to get to the wharf.

"Yesterday was a really shitty day. What was he doing at the wharf?" Mr Alker added.

"You know all those things just go through your head and his poor partner...

"We worked side by side," he added. "I'm devastated, absolutely devastated ... We're just wandering around here like lost dogs".

Mr Alker said his friend was a "really nice bloke".

"He helped everyone out, nothing was a drama to him."

Supt Willing said police were still trying to piece together the circumstances leading up to the tragedy.

"It's going to take some time to work out why and how this has actually happened." The community was shocked by the news, he said.

"It's quite tight-knit here. They were well known people and certainly it's going to have a big impact on everyone including the emergency services personnel who attended last night," he said.

"They're handling it OK," he said in a statement.

"It was dark, the water was very cold and at low tide. It would have been five or six metres from the wharf down to the water.

"They were also very severely stung by bluebottles," he added.

Local Senior Sergeant Garry Nowlan said the weather had been bad in the area.

"The wind was blowing, strong winds, the surf was up ... the sea was very choppy.

The incident was not being treated as suspicious, police said.

A report was being prepared for the coroner.