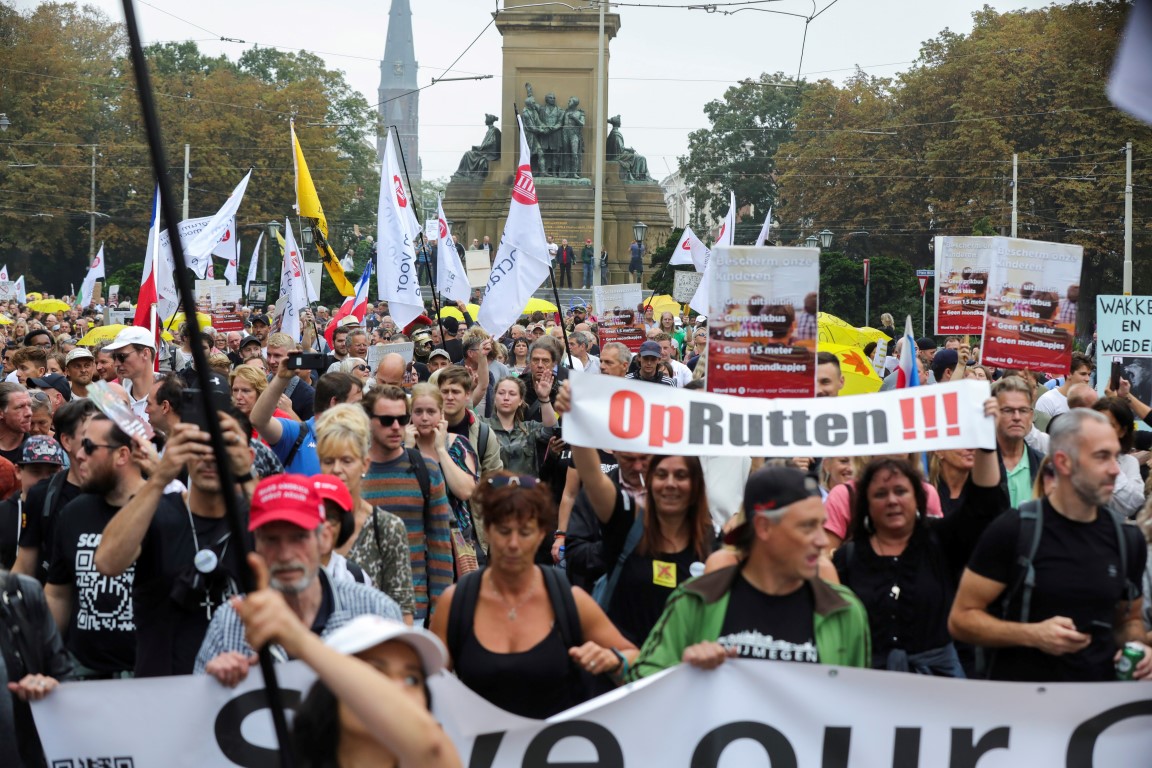 Protesters opposed to the mandatory "corona pass" march in The Hague. Photo: Reuters
Hundreds of protesters have marched against the introduction of a "corona pass" in the Netherlands, as proof of Covid-19 vaccination became compulsory to get into bars, restaurants, theatres and other venues.

Hours after the requirement to show the pass or a recent negative coronavirus test took effect, the government of caretaker Prime Minister Mark Rutte sacked a cabinet minister who had publicly questioned the measure.

Rutte's office said Deputy Economic Affairs Minister Mona Keijzer had been dismissed because her comments went against cabinet policy on an issue "of such importance and weight".

The launch of the vaccination pass coincided with the lifting of almost all social distancing measures in the country, where 72% of the population has received at least one vaccine dose.

While face masks will still be mandatory on public transport, students and teachers will no longer have to wear masks in schools, and a rule for 1.5-metre (nearly 5 feet) distancing in public places was also scrapped.

Carrying banners and placards as techno music played over mobile loudspeakers, several hundred protesters opposed to the pass weaved their way through the streets of the Dutch government capital, The Hague.

Some of the placards compared the Covid-19 restrictions to measures imposed by repressive governments. "Medical Apartheid. Stop vaccine passports," one sign read.

Most Dutch people support the so-called corona pass, which also faced opposition when introduced in other European countries such as Italy and France, and most of the criticism has come from the hospitality sector.

More than 40% of bar and restaurant owners do not plan to ask customers for a certificate, the country's Horeca Nederland hospitality industry association said, citing a survey of its members.

It said in a statement that many businesses saw the requirement as a "political tool" aimed at boosting vaccination take-up, and warned that it would damage the sector as it recovers from the pandemic.

In an interview with the Telegraaf newspaper, Keijzer - the sacked cabinet minister - had questioned whether the requirement was justified.

"If we end up in a society where we have to be afraid of each other unless we can show proof, then you really have to scratch your head and ask yourself: Is this the direction we want to go?" she was quoted as saying.