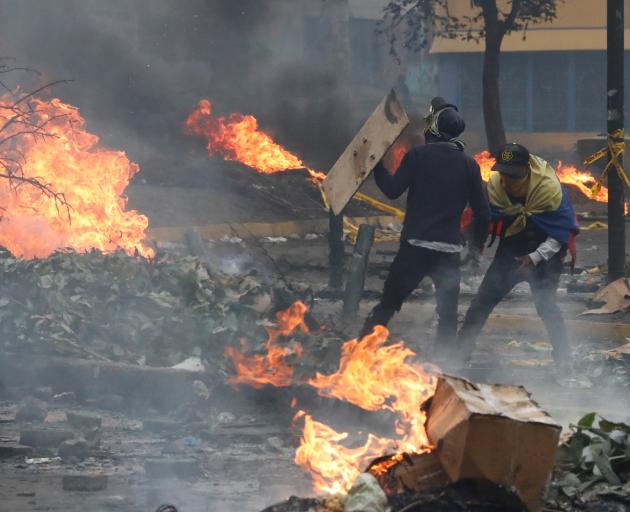 Demonstrators protest against Ecuador's President Lenin Moreno's austerity measures, in Quito, Ecuador. Photo: Reuters
Ecuadorean police battled masked men who launched homemade projectiles at them in downtown Quito on Sunday, as protesters defied a curfew that was imposed by President Lenin Moreno in a bid to quell anti-austerity unrest.

Parts of the highland city of nearly 3 million people resembled a war zone, with armoured military vehicles patrolling some streets and sounds resembling explosions and shots ringing out. In the historic centre, men took shelter behind makeshift barricades amid plumes of tear gas, according to Reuters witnesses.

Ecuadoreans posted videos on social media of burning road blockades as the 11th day of unrest over cuts to fuel subsidies threatened to derail the first talks aimed at re-establishing peace.

An initial round of dialogue between the government and protest leaders began on Sunday after being delayed by three hours because of "operational difficulties," said the United Nations in Ecuador, one of the mediators.

The unrest was the worst in the small South American country in more than a decade and the latest flashpoint of opposition to the International Monetary Fund in Latin America.

Moreno, who took office in 2017, signed a $4.2 billion deal with the IMF earlier this year, angering many of his former supporters who voted for him as the left-leaning successor of his former ally, Rafael Correa. He defended his cuts to fuel subsidies as a key part of his bid to clean up the country's finances, but denies the measure was required by the IMF.

The unrest first erupted with protests led by truck drivers. Indigenous demonstrators have since taken the lead, although they have said extremists from outside their ranks have sought to instigate clashes. They slammed the government for what they describe as a disproportionate crackdown.

Moreno, who announced last Monday he had moved his government to Guayaquil, ordered a curfew in Quito and surrounding valleys on Saturday and ordered the military to use force if needed to restore calm across the country.

But amid widespread defiance of the curfew in Quito early on Sunday, the military said it had lifted the emergency measure in the city until 8 p.m. (0100 GMT Monday), except in northern parts of the city near the nastiest clashes.

"Right now, across the country, they're mobilised," Vargas said on Sunday in a video posted on social media. "That's our way of resisting."

The militarisation of the dispute has fuelled criticism by human rights activists that the government's approach was too heavy-handed.

At least seven people have been killed, several hundred wounded and more than 1,000 people arrested in the unrest since it began on Oct. 3, according to the ombudsman's office, which monitors conflicts.

"Murderers!" one woman shouted from her window in the northern district of Mariscal as military helicopters droned overhead.

Moreno has called for peace and blamed the unrest on "dark forces" linked to Correa, now a fierce critic of the government who has been churning out videos showing police attacking people.

As evidence, Moreno's government has pointed to attacks on the comptroller's office, where documents related to a probe into the misuse of funds under Correa are stored.

The interior minister said a group of vandals set fire to the comptroller's office for a second day in a row on Sunday and that some 500 people had occupied a banned area in the city.

Correa, who lives in Belgium, denies any interference and has called Moreno a sellout for turning to the right after being elected on a leftist platform.

Conaie has slammed Correa as a "shameless opportunist."

"Correa's movement criminalised and killed our people for 10 years," Conaie said on Twitter. "Today he wants to take advantage of our platform for struggle."

Some 60 roads in the city were closed, the municipal government said, without elaborating.

Nearly all outgoing flights from the city were cancelled on Sunday. The airport said it was feeding stranded travellers snacks and beverages as surrounding areas were restricted.

Rodrigo Gomez, a Chilean tourist who ventured out of his hotel early on Sunday before clashes started, said he had travelled to Quito in hopes of seeing the city's famed lookout point "el Panecillo," considered a pre-Colombian sun temple.

"We made our reservations and two days after we had everything booked, this problem exploded," Gomez said.