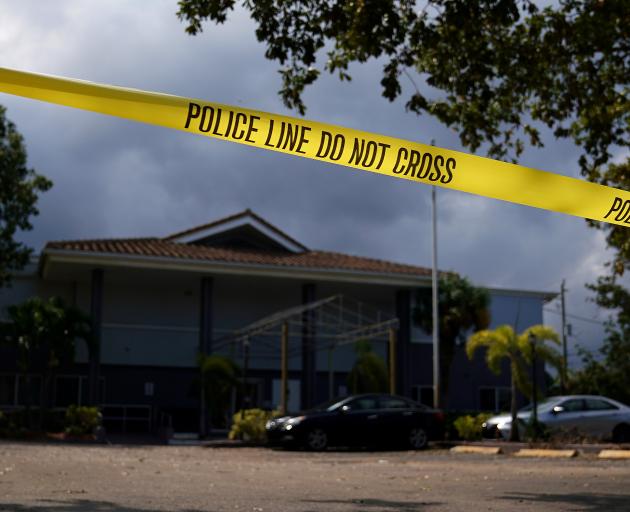 The Rehabilitation Center at Hollywood Hills. Photo: Reuters
Police have issued arrest warrants for four nursing home workers accused of criminal conduct in the death of a dozen elderly patients exposed to sweltering heat in Florida with little or no air-conditioning after Hurricane Irma struck in 2017, defence lawyers say.

The employees of the Rehabilitation Center of Hollywood Hills were expected to surrender to police on Monday and make their initial court appearance before a Broward County judge in nearby Fort Lauderdale, the defence attorneys said.

Two of the defendants, the nursing home's administrator, Jorge Carballo, and the charge nurse on duty at the time, Sergo Collin, are expected to be booked on 12 counts of manslaughter, according to their lead attorney, David Frankel.

The other defendants, both nurses, are expected to face less serious charges, he said. Defence lawyers said their clients are innocent of criminal wrongdoing.

The loss of life at the Hollywood Hills centre stirred outrage at the time at what many saw as a preventable tragedy and heightened concerns about the vulnerability of Florida's large elderly population amid widespread, lingering power outages across the state.

"We believe that when the evidence comes out it will show that the staff at Rehabilitation Center at Hollywood Hills was dedicated to their roles as caretakers and did everything they could under the emergency-disaster circumstances after the hurricane," Frankel said.

He told Reuters that prosecutors have yet to decide how or whether to formally charge the four employees.

Lawrence Hashish, an attorney for one of the nurses, said his client and her colleagues were caring for residents under natural disaster conditions.

"No one could have anticipated the tragedy to come," Hashish said.

That nurse was working for the facility as a contract employee at the time, her co-counsel, Hilham Soffan, told Reuters.

"The real crime is that the state is looking to blame selfless care givers," Soffan said.

The Hollywood Police Department declined through a spokesman to comment, saying only that a statement on the case would be issued on Monday.

The deaths have been the subject of a criminal investigation since they were first reported in the immediate aftermath of Hurricane Irma, which was blamed for killing more than 80 people in the Caribbean and the US mainland in September of 2017.

City officials said the nursing home continued to operate with little or no air conditioning after the storm knocked out its electricity, and daytime temperatures in the Miami area rose to 32 degrees Celsius (90 degrees Fahrenheit).

The facility was finally evacuated, under conditions described by workers at the time as chaotic, when four residents were found dead three days after the storm made landfall.

Four more died at or en route to a nearby hospital during the evacuation, and four others ultimately succumbed to the effects of heat exposure, bringing the death toll to 12.

The medical examiner ruled the deaths homicides. Frankel said the majority of those who died had been under hospice care or otherwise gravely ill.

Florida's Agency for Health Care Administration suspended the facility's license after determining that medical personnel at the home had delayed in calling for emergency assistance when temperatures inside reached excessive levels.

The case is reminiscent of the prosecution of the owners of a New Orleans-area nursing home who were charged with negligent homicide in the deaths of 35 patients who drowned in flooding caused by Hurricane Katrina in August 2005.

The couple, Salvador and Mabel Mangano, were acquitted by a jury in September 2007.