A Scottish band's rendition of classic Donald Where's Your Trousers? with some altered lyrics "inspired by the alleged antics" of the President of the United States, has gone viral.

Hoodoo Zephyr's version of the song has lyrics such as "Donald is a doozer" and "Tweeting in the morning, tweeting in the evening" and features many of the polarising world leader's exploits and policies that have grabbed global headlines.

The UK band, from Aberdeenshire, posted its video on Facebook just before the US President arrived in the United Kingdom to meet with British Prime Minister Theresa May.

Since it was uploaded, the video entitled Donald Medley, has been viewed more than 30,000 times and has been shared more that 730 times.

The band said on the post the video was "a pleasing parody of some well loved tunes, lovingly blended into this spell-binding medley, served up for your enjoyment.

"This track is not, and will not be, commercially available, and was recorded and filmed purely for the amusement of the band."

Trump's visit to the United Kingdom was met with some opposition, as a blimp depicting the US president as an orange, snarling baby was inflated just outside the British parliament today.

Trump, who arrived in Britain on Thursday, told the Sun newspaper that planned protests against him in London and other British cities made him feel unwelcome so he was avoiding the capital as much as possible.

"I guess when they put out blimps to make me feel unwelcome, no reason for me to go to London," Trump told the newspaper.

"I used to love London as a city. I haven't been there in a long time. But when they make you feel unwelcome, why would I stay there?" 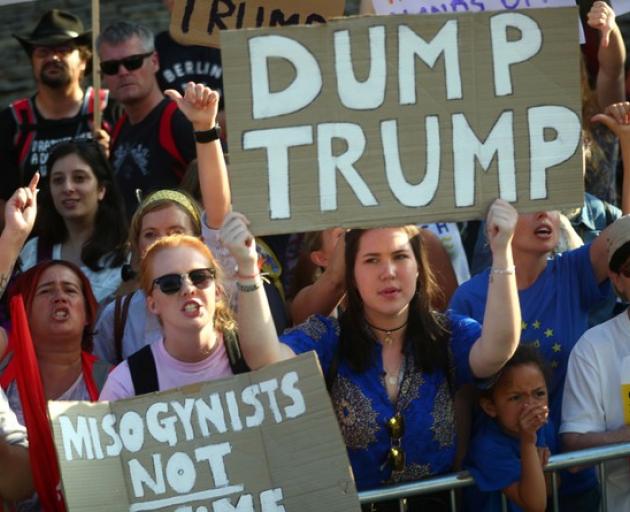 Demonstrators protest outside the grounds of Blenheim Palace. Photo: Reuters